Article ‘I couldn’t save him mum': Heartbreaking words of a four year old 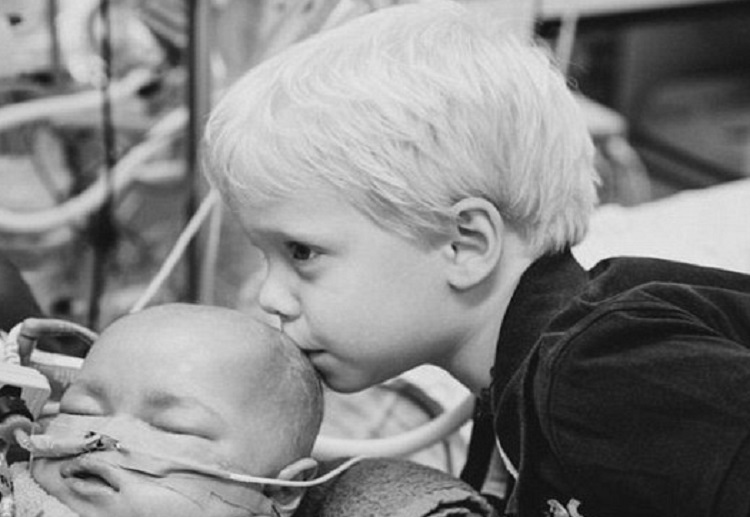 Isaac was just three-years-old when he donated his bone marrow in an attempt to keep his little brother Ethan alive.

His mother Michaela told Daily Mail Australia her son’s condition was so rare it was only a one in 77,000 occurrence.

‘It meant he unfortunately had a lot of issues,’ she said.

Michaela said her and her husband Craig spent the first 10 weeks of Ethan’s life in hospital.

‘We took him home for just 22 hours then had to take him back,’ she said.

She said he grew so sick, his only chance at life was a bone marrow transplant.

But devastatingly enough, Michaela was told both she and her husband Craig were not matches for their son.

But sure enough, their other son Isaac was. Isaac Baguley was just three-years-old when he donated his bone marrow in an attempt to keep his little brother Ethan alive.

While she was relieved Isaac was a match, she said she was also ‘worried and scared’.

‘We wanted a solution for one child but still didn’t want to put another child through it,’ she said.

‘If Isaac had said no, we wouldn’t have done it.’

Just three-years-old at the time, Isaac willingly went into hospital and donated bone marrow to his critically ill brother.

‘Isaac was an awesome big brother to Ethan,’ she said.

‘It was pretty special.’

But just 44 days after the potentially life-saving surgery, Michaela said Ethan tragically died due to complications.

Ethan’s death was devastating for the Rockhampton couple, but Michaela said they knew they’d done ‘absolutely everything possible’ for their son.

But devastatingly, she said Isaac didn’t understand why his brother died.

Michaela said she did what she could to make Isaac understand he gave them the precious gift of another 44 days with Ethan.

Now more than two years after their son’s death, Michaela said the family was taking it day by day.

‘It’s always hard when you’re missing a family member but life goes on, you don’t have a choice,’ she said.

‘There’s always someone missing from your family and that’s really difficult.’

Such a gorgeous big brother.
Share your comments below.