Article ‘I Delivered My Mother-In-Law’s Baby – And She Didn’t Even Know She Was Pregnant!’ 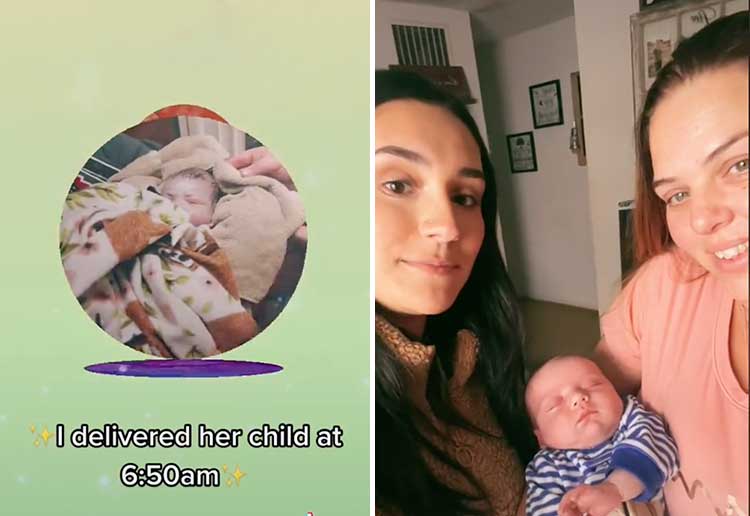 When Brooklyn Pennington got a call saying her mother-in-law wasn’t well, she could never have imagined that just a couple of hours later, she’d be helping her delivery a baby.

Brooklyn, 21, says nobody knew her mother-in-law Jen, 37, was pregnant – not even Jen herself. Then an early morning call started a chain of events that ended with a new addition to the family.

“My father-in-law gives me a call at 2 in the morning, and he’s like, ‘I’m about to take Jen to the ER,'” Brooklyn explained on TikTok. She was obviously concerned, and needed to get to their house to check on her mother-in-law and pick up her son, who was spending the night with his grandparents.

As Jen explains, she’d been feeling unwell for a little while that night. “I went to bed and I felt very uncomfortable, I couldn’t get any sleep or anything. It was like 2am in the morning, I got up, walking around, kept going to the bathroom thinking I had to pee. I had cramps, was thinking maybe my underwear was too tight, so I went and changed my underwear. Still was having the cramps. At about 5.30am I looked at the bathtub and thought, ‘You know what, I’m just going to fill this up and lay in it.'”

And that’s where Brooklyn found her when she arrived.

“I get here and I get to the bathroom and I’m like, ‘Hey Jen, is everything ok in here?’ and she’s like, ‘No, I’m having a baby!’, Brooklyn said. “Obviously I’m still not believing her at this point, so I open the shower curtain and I’m like, ‘Can I check you?’

“And she’s like, ‘Sure go ahead’. I check her and she’s crowning. So I run out to the garage and I get my husband and father-in-law and I’m like, ‘Hey, she’s crowning, you guys need to get in here.'”

‘Three pushes and he was out’

Jen, who has a 20-year-old, 15-year-old and 12-year-old, gave birth in the bathroom, helped by Brooklyn, who is studying to be a nurse. “Maybe three pushes and I get back to the bathroom and he’s here. I delivered him and he was perfectly healthy 7 pounds, 12 ounces.”

@brooklynpennington Story time! If anyone has more questions, feel free to comment and we can answer as many as possible! @Jennifer Lynn ♬ original sound – Brooklyn Pennington

Jen says she had some subtle pregnancy signs, but hadn’t gained weight.  “I felt kicks but I thought they were phantom kicks because you can still have signs that you’re pregnant when you’re not pregnant,” she said.

Brooklyn added that the rest of the family were just as shocked that they missed the pregnancy: “I didn’t see any signs and no-one in the family did because she wasn’t showing, she still had her belly button ring in when I opened the shower curtain. She’s been the same size that she’s been since we’ve met and she’s not a big girl.”

Wow, what a story! Have you ever helped anyone give birth? Let us know in the comments below.