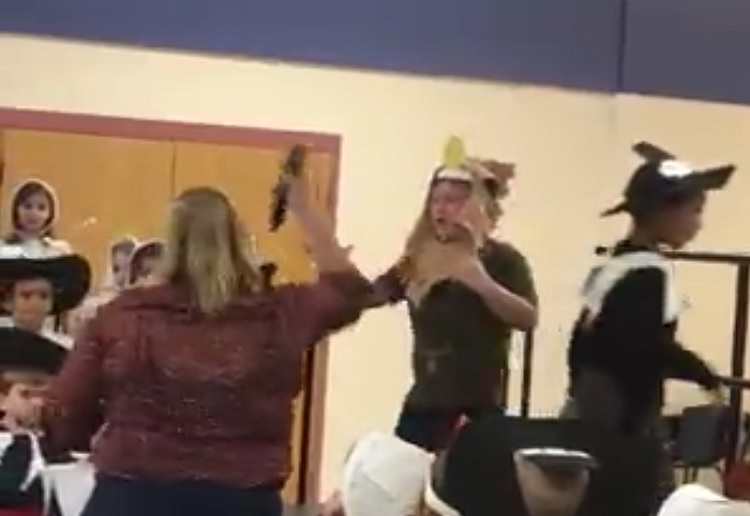 A six-year-old boy with autism burst into tears after a teacher snatched away a microphone, the video captured  by his furious parents has shocked the nation.

Caleb was playing a turkey in the production and he can be seen approaching the microphone in the video to say his line: “gobble gobble”.

“What does it matter if he wanted to say gobble gobble?” Ms Riddle, wrote in a post put up along with the video.

the heartbroken Caleb can be heard screaming “Oh no”, before he begins to cry on stage.

Caleb’s parents shared the video on social media and hundreds of people have rallied behind them, outraged at the teacher’s harsh actions.

The clip has sparked a furious response from fellow parents and teachers, many of whom described the teacher’s behaviour as “outrageous”.

Mr Squires wrote on Facebook: “This is my little boy in his thanksgiving play, he is the last kid and has level one high functioning autism, he has the biggest heart and always happy. Now watch it and see what a teacher of kids does to him he has came home from school and said he gets to say gobble gobble cause he was playing the Turkey. I am reaching out to see if something can be done.”

Ms Riddle said she left the school in tears after the incident.

The school’s Superintendent Mark Manchin told WDTV that the moment in question came after the play had already ended.

“It was a mistake but there was no malice,” he said.

“The program was over, at least as I understand, and the teacher had taken the microphone.”

He said that if they had to do it over again they would probably “do it a little differently”.

The school chose not to name the teacher and said they will be making more enquiries into the incident.

The video has received a huge response on social media with over 49K shares and 17K plus comments.