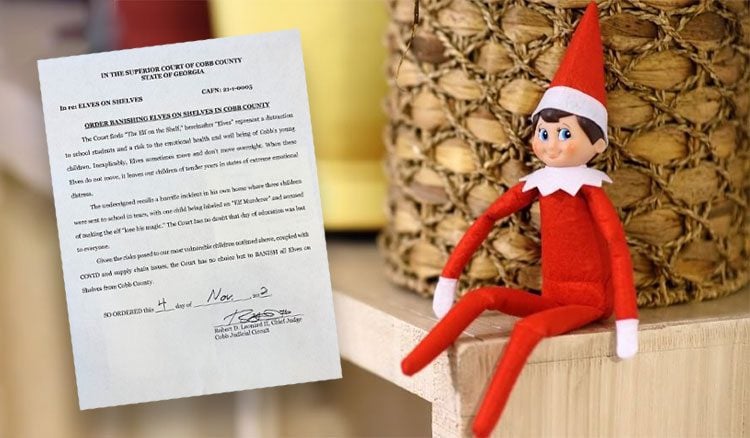 A judge has drafted up a court order banishing Elf on the Shelf. And we’re not mad about it.

Hear us out. The world is divided into two distinct camps: those who do Elf on the Shelf, and those who don’t. But there’s a murky in between group (which includes me), who love the concept but honestly just can’t be bothered any more. And now we’ve got a Get Out Of Elf Jail Free Card.

For those who don’t know, Elf on the Shelf is a Christmas tradition hailing from a book released in 2005. The premise is that the Elf arrives on December 1, and keeps a close eye on the kids’ behaviour during the day. Every night, when the children are sleeping, the Elf heads back to the North Pole to give Santa a full report on whether they’ve been good or bad. And each morning when the children wake, the Elf is in a different position in the house, usually up to some sort of cheekiness.

And while most of us start out the month with gusto, it’s not long before the novelty of moving the Elf and thinking up new Elf antics starts to wear off. So a very understanding US judge has created a court order banishing the elves.

“My family loves all of our Elves and it is a fun family tradition. However, it is a nightly commitment and if you miss a night, you have some explaining to do,” Judge Leonard, chief judge of the Superior Court of Cobb County, explained.

“I decided that for those people that needed to retire their Elf or put it out later in the year, I could take the heat for them with a mock order,” Leonard added.

Tired of living in Elf on the Shelf tyranny? Not looking forward to the Elf forgetting to move and causing your kids emotional distress? I am a public servant and will take the heat for you. My gift to tired parents.

P.S. – If you love your elf, keep your elf. No contempts. pic.twitter.com/JcqAOljbAS