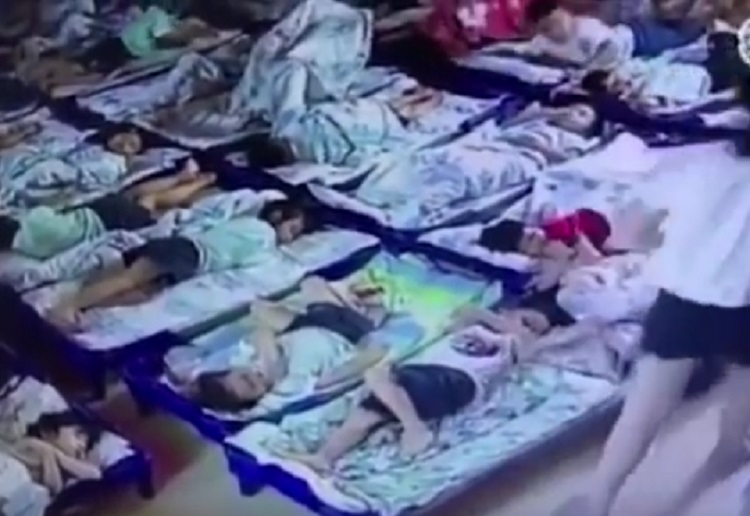 Two kindergarten teachers in central China are under investigation after they allegedly physically abused their students.

Parents at a preschool in Xi’an city, Shaanxi province, said that their children had come home with apparent red needle marks on their bodies, shares Daily Mail.

Upon checking surveillance footage, the horrified parents saw one of the teachers holding two students still and stabbing them with an unknown object in an attempt to get them to take a nap. The object was later identified to be a paper clip.

The incident has been reported to the police and two teachers have been detained by the Chanba police department.

The preschool, Jinmiao Kindergarten, has confirmed the incident, saying that their teachers, identified as Lan and Yang, had used paper clips to stab misbehaving students, according to a China Business News report.

One of the parents, Ms Pan, said parents started raising concerns about their children being mistreated in a group chat on Saturday.

‘One of the parents said she saw red needle marks on her daughter’s arm,’ Ms Pan said.

‘The girl then said the teacher stabbed her with paper clips,’ she said.

She then arrived at the preschool with other parents to check the surveillance footage, concerned about her son as he was in the same class of 40.

She was shocked – and furious – to see the teacher abusing her child.

The female teacher was seen holding an object and jabbing Ms Pan’s son, who was lying down on one of the napping cots.

He was also seen twisting and turning as the teacher continued poking him as he reportedly refused to take a nap.

The teacher was also seen holding another student while she jabs him on the thigh, arm, bottom and back with the same object.

Upon investigation, more than 20 students have been stabbed with paper clips by the kindergarten teachers when they misbehaved, the report added.

The Chanba police department has confirmed that the two teachers were detained and are currently under investigation.