Article This ‘Baby Salad’ Is Sending Women Into Labour 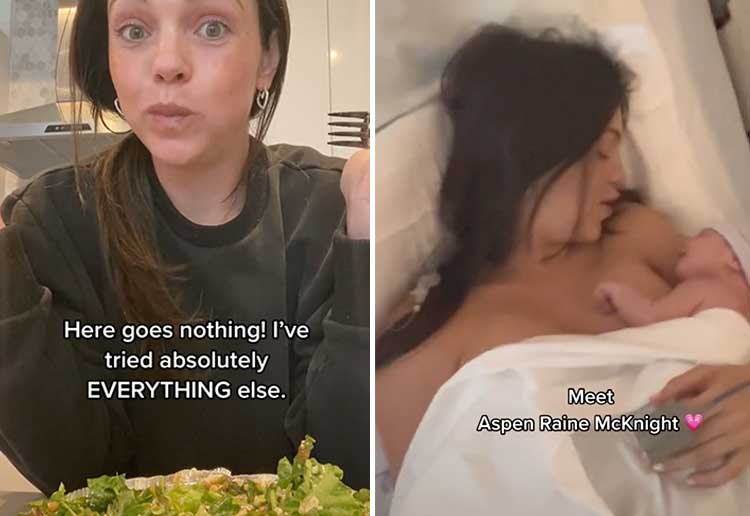 A delicious salad with a secret-recipe dressing has been credited with sending hundreds of women into labour over the past three decades.

Los Angeles restaurant Caitoti Pizza Cafe has made a name for itself with its ‘maternity salad’, which is famed for kickstarting labour.

Mum-to-be Tayla Burke decided to give the Californian eatery’s ‘Baby Salad’ a go to help get her labour underway.

“I’m trying this famous salad from an Italian restaurant in Studio City that’s apparently known for putting hundreds of women into labour naturally,” she said.

“The salad and the toppings are super simple but apparently it’s the secret dressing recipe that they won’t give out that does the trick. I tasted it, it tastes pretty good … I even licked the dressing clean.”

Tayla then shared in the comments just a few hours later that her contractions started the next morning. The next video Tayla shared was the announcement of her baby’s birth.

And her story isn’t uncommon, with dozens of mums swearing by the tasty salad to get labour underway. “I had my son 48 hours after the salad,” wrote Jennifer Steinberg. “One week early!”

While the salad’s main ingredients are simple enough: romaine lettuce, gorgonzola cheese, walnuts and watercress, the contents of the herb-balsamic dressing is a closely-guarded secret. Some have suggested there could be a splash of castor oil in the dressing, which has often been linked to kick-starting labour.