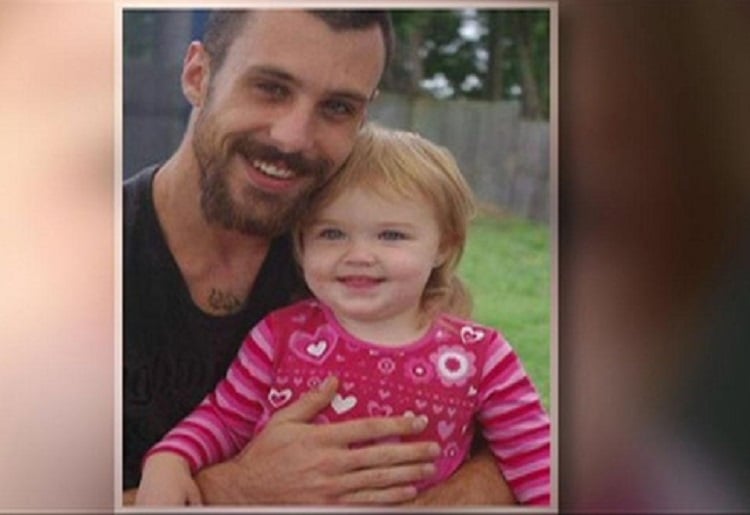 Matthew Lee Williamson sentenced over the manslaughter of his three-year-old daughter Kyhesha-Lee Joughin.

In December we shared the story of young Kyhesha-Lee who was found deceased at her father’s unit in Petrie, Queensland  in March 2013.

The court heard a doctor found she had suffered deliberate and protracted physical and sexual assault in the week leading up to her death, from an infected internal injury.

Crown prosecutor Carson Lloyd said the stomach injury, one of many, was consistent with a blow from a fist, foot, or adult falling on her.

She also had bruising on her face, lacerations on her ear as if she had been pulled, an injury to her temple, and cuts to her lip from possible blows.

A friend who visited the unit allegedly noticed Kyhesha-Lee was unwell and raised the alarm the evening before she died.

Magistrate Christine Roney said there was a “sturdy” case against the toddler’s father.

“In the 24 hours prior to her death there is direct evidence … that it was drawn to his attention, should it need to have been, that the child needed medical attention,” she said.

“The eminent doctors give evidence that in the 12 to 24 hours prior to her death she would have been in extreme pain.”

In 2013 Matthew Williamson’s family said he looked after Kyhesha-Lee full-time, and was dedicated to his daughter, with a tattoo of her name on his left arm.

The little girl’s first word was “Dad”, a sign of her devotion to her father, Kyhesha-Lee’s uncle and Matthew’s brother Jarrod Williamson told The Courier-Mail.

The Brisbane Supreme Court heard this morning that he used a rope to keep her locked in her room while he slept all day. He also smacked and slapped Kyhesha-Lee Joughin so hard his flatmate could hear the abuse in another room, reports news.com.au.

The court was told Williamson was often enraged at the girl because she threw faeces while detained in her room, usually from about 7pm.

“It was like two adults fighting,” Williamson’s former flatmate Christopher Kent told during the sentence hearing.

Kent also told the court that Williamson was more interested in getting coffee and a cigarette than helping him resuscitate the toddler.

He tried to revive Khyesha after noticing her lips were turning blue and tried to wake Williamson, who was sleeping on a nearby couch, to help.

“He just wanted his coffee and smoke.”

Kent has previously been convicted of sexual assault and has a criminal record dating back to 1989 but denies ever abusing Khyesha.

He’s currently in jail, he says, for driving while disqualified and is worried fellow inmates will find out he’s giving evidence.

During the sentencing hearing, Justice Roslyn Atkinson said she was satisfied Williamson had delivered the fatal blow to Kyhesha-Lee Joughin, saying the child had died a “slow, painful death”.

“It would be hard to imagine the misery this frightened little girl suffered,” she said.

Justice Atkinson told the hearing Kyhesha-Lee had lived in a “depraved and disgusting” environment and Williamson was “callous”.

He has been deemed a serious violent offender, which means he must serve 80 per cent of his sentence.

Kyhesha-Lee’s mother, Danielle Joughin, 29, said outside court she was pleased to see Williamson jailed for nine years, but she did not feel she had received justice, reports Courier Mail.

Ms Joughin said nine years did not compare with the loss of her daughter’s life.

“To think he took her from me out of spite and this is the way he was going to treat her afterwards. It’s disgusting,” Ms Joughin said.

She said it was quite disturbing to hear details of the injuries inflicted on her daughter during sentencing.

“She was bubbly, she was energetic, she was funny, she had a little Miss Diva attitude and I miss that about her, just like her little brother Joey, full of energy, full of love,” Ms Joughin said of her daughter.

She said she and her family were heartbroken and every day was a task.

“Her memory will never be forgotten, there are pictures on the wall, we’re always talking about her,” Ms Joughin said.