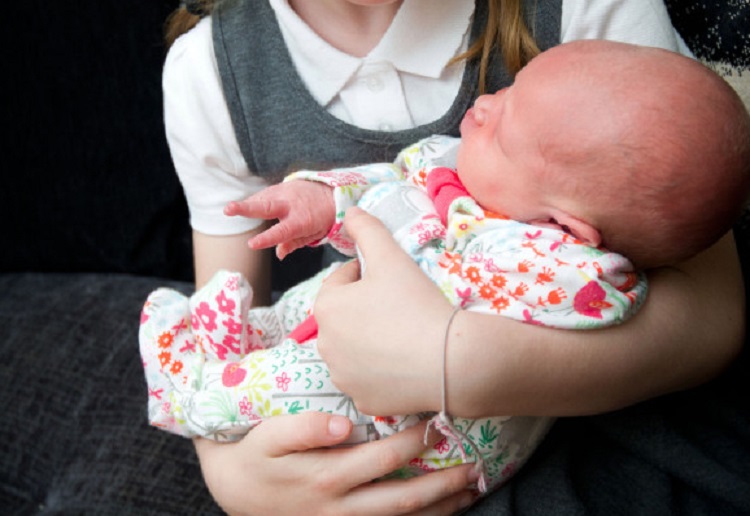 Mum watched in horror as a sick thug ran up and punched her five-day-old baby in the face in the supermarket.

Oh my gosh! This poor mother and big sister must have been so terrified.

The man punched tiny Elsie Rose in a Tesco store, then calmly apologised and said: “Sorry I thought it was a doll.”

Elsie’s sister Libby, 7, thought he had killed baby Elsie in the store in Greater Manchester, The Sun reports.

“I’m absolutely broken and torn apart. I can’t believe what me and my daughter had to see last night it was just so horrific,” mum Amy Duckers said.

“I never ever want anyone to have to go through that again.

“We all heard the punch land on my little baby. We didn’t react at first as we were just so shocked.

“Then I just screamed. He could easily have killed her.”

Elsie, who weighs just 3kg, was raced to hospital but thankfully is not believed to have been seriously injured.

Monday’s horror attack came as Amy and partner Lewis Temple, 24, took Elsie Rose out for the first time since she was born last week.

The family nipped into Tesco where they met a neighbour, who came over to look at the baby.

“Our neighbour then saw one of her work colleagues who was with her husband and said, ‘Aww come and have a look at this lovely baby’,” Amy told the Manchester Evening News.

“The next thing he ran over and punched Elsie Rose in the face leaving a very big fist mark shape across her forehead.

“We were mortified. My daughter was screaming thinking he had killed the baby.

“He then just apologised and said, ‘Sorry, I thought it was a doll’.”

The family alerted security at the supermarket and Elsie Rose was taken to Wythenshawe Hospital where she was monitored overnight before being allowed home today.

Amy, a fulltime mum who lives in Brooklands, said: “She was quite sickly and sleepy last night but at least she is home now.

“I just cannot believe it happened and neither can anyone I tell. Strangers were even hugging me at the hospital when I told them about it.

“It has really put me off taking her out again though.”

Amy posted the traumatic experience on Facebook, praising staff at Tesco for the way they handled the situation.

“Thank you so much to Baguley Tesco for all you did tonight, you were all amazing thank you so much for the way you dealt with the situation and treated us all,” she wrote.

Greater Manchester Police said a man had been arrested on suspicion of assaulting the baby.

“Police were called shortly before 6.45pm to a supermarket on Altrincham Rd in Baguley on Monday to reports of a child having been hit,” police said in a statement.

“The baby girl was taken to hospital as a precaution and has since been discharged.

“A 63-year-old was arrested on suspicion of assault and is currently in custody being questioned by officers.”

The family of a five-day-old sleeping baby punched in the face by a 64-year-old while out shopping in Tesco with his wife are furious today after he was only fined for the assault.

David Hardy admitted striking Elsie Temple in the supermarket’s biscuit aisle in Baguley, Manchester but then claimed he thought the little girl was a doll, reports Daily Mail.

Company boss Hardy, a father of one, hit Elsie when she was being pushed in a carry cot by her mother Amy Duckers, 27, who had taken her out for the first time since her birth.

The baby immediately cried out in pain – and was left with an injury the size of an egg on her head as her older sister Libby, seven, screamed hysterically to her mother: ‘Is she going to die?’

In an extraordinary plea to be cleared of assault Hardy, of Greater Manchester, said today: ‘It looked like a doll to me. I made a dreadful mistake. It is ridiculous but it is what happened’.

But district judge Sam Goozee rejected his defence as ‘implausible’ and fined him £900, ordered him to pay £100 compensation to his victim and £500 costs.

The baby’s family yelled ‘f*****g joke’ as he was sentenced and confronted Hardy outside court yelling: ‘That sentence is disgusting. You punched a baby in the face. How do you sleep at night?’.

She added: ‘Basically, it means you can punch a five-day-old baby and all you will get is a £900 fine. It’s sickening. The judge was satisfied he knew he was hitting a baby but then fines him. I’m literally gobsmacked.

‘Hardy knew full well she was a baby. He admitted he’d come over to see a baby.’

Shocking! Not something you would ever expect to read.