The “distressed” mother of Caboolture toddler Mason Lee will make another bail application when she feels well enough.

The case was briefly mentioned in the Caboolture Magistrates Court this morning, reports 9 NEWS.

Ms Lee’s lawyer Brendan Ryan indicated he had received a “substantial” brief of evidence from police only that morning on a hard drive and needed about two months to check the material.

Outside court Mr Ryan said he would make a fresh bail application for Ms Lee before the case was next mentioned on December 13.

“At the moment she’s coming to terms with the loss of her child and as soon as she feels well enough I’ll make that application,” Mr Ryan said.

“She’s very distressed because she’s lost a child – any parent feels an absolute absence in their heart when they lose a child, for whatever reason, and Anne Maree is no different.”

Asked whether Lee could have a fair trial given the high-profile case, he replied: “We can always get a fair trial in Australia, particularly in Queensland.”

Welfare officers visited Mason Lee’s mother three days before his death, failing to discover he was dying at another residence.

It’s alleged Anne Maree Lee told welfare officers that Mason was not home, and was staying with his stepfather William O’Sullivan at Caboolture South, only four minutes drive from her home, court documents allege, reports 7 NEWS.

She believed the child protection officers would try to see the toddler there. They didn’t.

Last week in court, one of the accused, Ryan Hodson’s girlfriend, Sheila Low alleged child protection officers arrived at Lee’s home on Compass St on the Tuesday or Wednesday before Mason’s death.

“She (Lee) told me that Child Safety was assisting her and did a welfare check at her house three days prior,” Ms Low, 30, told police.

“I asked about Mason and she said that they hadn’t seen him as he was with Will (O’Sullivan). She was told that Child Safety were going to try to see Mason at Will’s.”

Ms Low claimed she had raised concerns with Hodson about O’Sullivan, who allegedly showered with Mason for “more than an hour at a time”.

She told police Hodson replied that he wasn’t going to “accuse my mate”.

Hodson had also told Ms Low how he encouraged O’Sullivan to rub the toddler’s face in vomit.

She claimed she saw Mason two days before his death, lying on O’Sullivan’s bed covered in vomit.

Police claim O’Sullivan left the toddler alone for about 20 minutes on the night of June 10.

He was seen on CCTV outside his front door telling himself “I can’t f***ing do this”.

O’Sullivan left the property and eventually returned with another man, Shane Gruber – who called emergency services.

Last week Hodson was granted bail, set to reappear in court next month.

William O’Sullivan, 35, and Anne Maree Lee, 27, remain behind bars and are due to face Caboolture Magistrates Court today, (Tuesday.)

The devastating details on the horrific abuse the murdered toddler had suffered are shocking.  (DISTUBRING content) 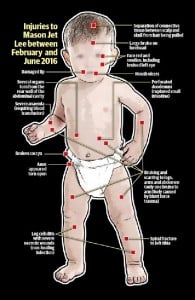 More news on this story: