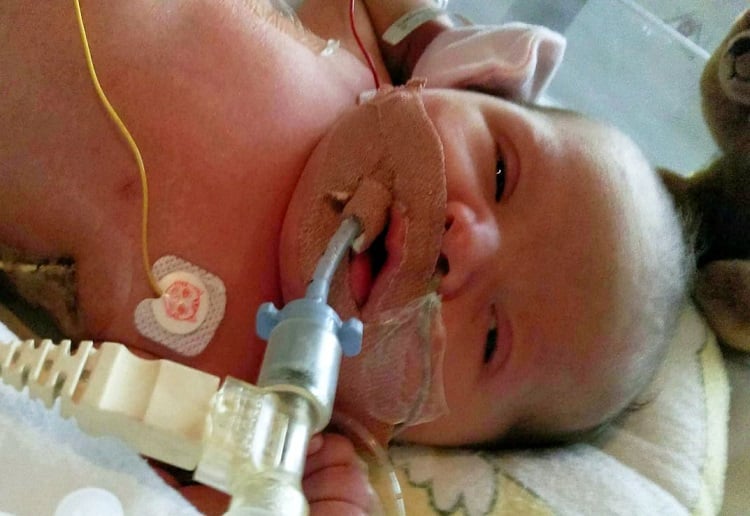 BABY born with more water in her body than blood has been dubbed a “miracle”.

Frankie Morrison was born via Caesarean section last year and had just 35ml of blood in her body – the equivalent of two tablespoons, reports The Sun.

Newborns usually have seven times that amount of blood in their body and baby Frankie had to be resuscitated by doctors as soon as she left the womb.

Her mother, Maria Sanders, 32, had to undergo the emergency procedure on October 20 when medics noticed that her baby wasn’t moving inside the womb.

Doctors had told Maria and her partner Chris Morrison, 33, to expect the worst but their little girl managed to pull through with the family set to celebrate her first birthday next week.

Mum of three, Maria, told the Hull Daily Mail: “It’s brilliant. We are just the luckiest people in the world.

“I would never class myself as unlucky again after seeing what Frankie went through. I still cannot believe the baby is sat in front of me after everything she has been through.

“She has been through so much, but here she is now sat still shaking her rattle and shouting away like any one-year-old. She is so brave.

“She is a little toughie and our soldier. Everything that was thrown at her she just batted it out the park. She really is an amazing girl.”

Maria was rushed into theatre last autumn after Frankie had not moved for nearly two days because of the lack of blood in her body.

She said: “When I came around from the operation I could see people standing around me crying.

“I thought I had lost her. They said she had been having breathing difficulties and told us in a roundabout way that I had to go to see her because it’s not looking good. They said they didn’t hold out much hope for her.”

Doctors had told the family a priest was available if they wanted the child to be blessed.

Maria continued: “I went up to her and there was this chubby little eight pound baby who was so bloated because she had all this water instead of blood inside her.”

After Frankie’s condition had been stabilised she was flown to a hospital in Leicester so doctors could put her on a specialist life-support machine.

Doctors warned the parents that it was possible Frankie could be permanently wheelchair-bound or brain damaged.

But her condition improved during the helicopter ride meaning she could be flown back to hospital in Hull after just three days of specialist treatment in Leicester.

She left doctors amazed after making a full recovery just three weeks later and was well enough to be taken home for the first time where she has two sisters: Brooke, ten, and Mollie, five.

With Frankie’s birthday in just five days’ time, Maria paid tribute to the doctors and nurses who saved her daughter’s life.

She said: “I just want to thank all the staff, because without them she would not be here.

“They are amazing people, absolutely amazing. They are miracle workers in that ward. They don’t get enough recognition for what they do.

“We feel so lucky because we saw so, so many sad things in those three weeks but to walk out with Frankie is the best feeling in the world, and it is down to them.”

Such a precious little miracle.