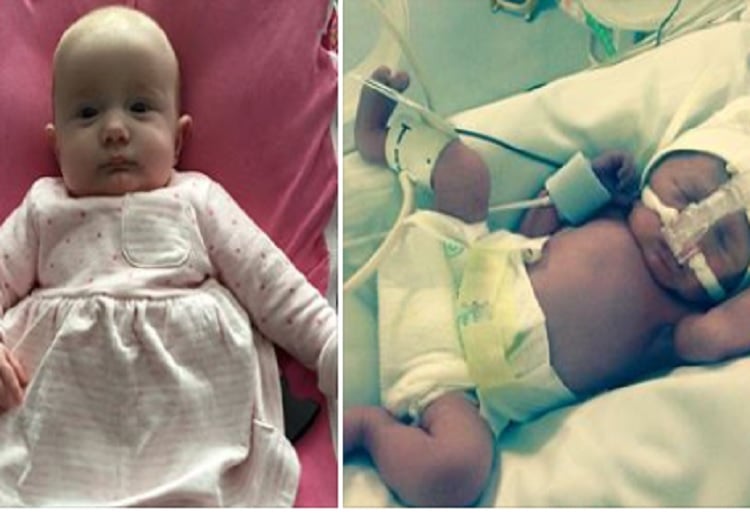 Baby crushed in the womb by a seatbelt after her mother was in a car crash.

Hayley Mee, 32, and her fiancé, Scott Price, 31, were involved in an accident when someone accidentally reversed into their car at the traffic lights.

The force of the jolt caused Ms Mee to go into labour at just 31 weeks. Nurses struggled to find the baby’s heartbeat and she was taken to theatre to have an emergency Caesarean-section.

Felicity stopped breathing shortly after birth but doctors managed to revive her and she was taken to intensive care, reports Daily Mail.

After four weeks in hospital, she was allowed home to her parents house in Bolton – and has just celebrated her first birthday.
‘As soon as the car reversed into ours I got an awful sharp pain across my stomach.

‘It was an accident and no one was injured apart from me, I didn’t care about our car, I just wanted to get myself to hospital.

‘I was terrified our baby wasn’t going to make it, Felicity was going crazy inside my womb, she was wriggling around and somersaulting over and over again.

‘I had blood tests and although Felicity’s heart beat was going crazy at first, nurses couldn’t find it when they checked later on, I was hysterical, I thought we’d lost her.

‘That’s when doctors started rushing around and I was wheeled down to theatre to have a Caesarean-section.

‘She was born weighing 3lb 5oz and although she wasn’t breathing at first, I soon heard her start crying.

‘It was a huge wave of relief, no one knew how long or if she’d been deprived of oxygen in the womb or if she’d be OK in the neonatal ward, we just had think positive.

‘I couldn’t walk and had to wait 12 hours before I could even touch my baby girl, the whole thing was so traumatic but both me and Scott are so thankful to all the hospital staff who saved our daughter’s life.

‘I finally got my first cuddle with her later that day and after four weeks, she was allowed home and weighed 5lbs.

‘It was amazing to celebrate Felicity’s first birthday. Last year we had no idea if she was going to survive the birth, let alone hit any milestones.

‘Thankfully she suffered no brain damage or lasting injuries from the crash and we’re all enjoying life as a family.’

The couple had been on their way back from the Trafford Centre when they stopped their Chevrolet car at traffic lights, last September.

Just seconds later, the car in front ploughed into theirs after the driver accidentally placed the vehicle into reverse.

We’ve still got the car now, we only had a crack on the front grill but because I was pregnant and the seat belt was across my stomach, I literally felt crushed by the impact.

‘It was so painful and I knew by Felicity’s movements that we needed to act fast and get to the nearest hospital, Bolton Royal Infirmary.

‘One minute we were happily living our lives as expectant parents and the next we terrified we were about to lose our first baby.

‘Once I’d had Felicity, I was able to ring our parents and tell them the news, they were all in as much shock as we were.

‘It was a nightmare at the time but now seeing Felicity doing so well it’s as though it never happened.

Such a gorgeous little girl.