Article More than just a pair of shoes 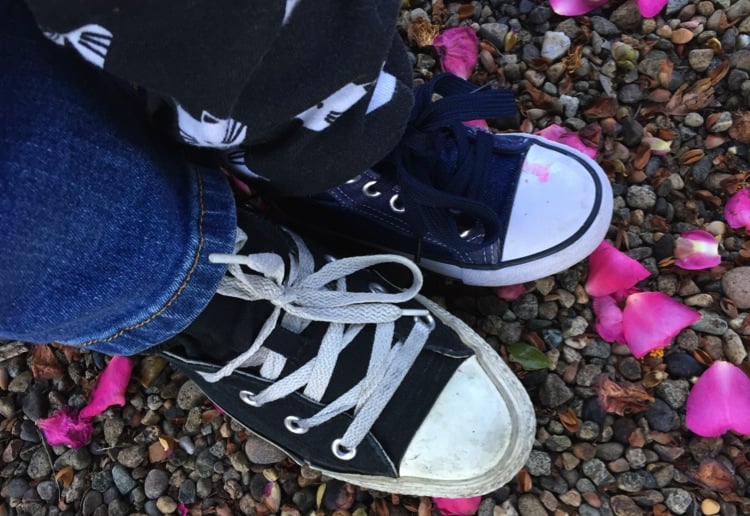 When I was 22, I bought a pair of Converse shoes. It wasn’t my first pair and certainly not my last – but it was a special pair. Why so special? They have always been my favourite pair of shoes and as a result, they’ve been on some pretty special adventures.

When I did a ski season, they took me up and down the mountain each day as I hitchhiked up to my job with my mates. Then they went on the road trip afterwards – an endless summer of beaches, beers and music with the best friends in the world. I’m sure they still have the sand and campsite dirt on them from those days.

When I hopped on a plane and moved to the other side of the world, they carried me along my merry way. They’ve paced airplane aisles, and spent endless hours waiting at airports. Europe and North America wouldn’t have been the same without those babies. Pubs, clubs and fancy cafes; a bobsled ride, the Arctic circle and reindeer sightings. Meeting some of the best people I’ve ever known, and some I’d rather forget. They’ve left footprints in nearly every European capital and taken memories from the cities in between. And they may or may not have gotten lost getting to the Grand Canyon.

They’ve made it through 6 or 7 Big Day Out’s, 4 Falls Festivals, Coachella, Glastonbury, 2 V Festivals, a Secret Garden Party, a Gatecrasher, a Global Gathering and an undisclosed number of individual gigs. They’ve been privy to some of the best musicians we’ve ever known – and they almost, almost, met a Beatle.

They also now have holes in the sides so wet weather means wet, dirty and smelly feet.

They’ve seen NHL, NBA, NBL, AFL and NRL games. They were there when I sang the national anthem with two best mates in Cardiff as the Wallabies played Wales, and saw a lot of spilled beer afterwards. They were there in the crowded London pubs as we played for the World Cups, in both Rugby and Football and they were there in Singapore as I watched Mark Webber on the grid in his Redbull F1.

So you see, one pair of shoes – a lot of adventures.

I found them packed away in a cupboard just the other day (they had gone into retirement) and like a smack in the head, all those adventures came rushing back at me. I couldn’t wait to get them back on my feet again. As I left home with the kids this morning, I noticed my toddler also had her Cons on and I couldn’t help but smile.

One pair of shoes at the end of their journey, and another with the whole world at their feet.

Do you have a ‘special’ pair of shoes? Please share in the comments below.