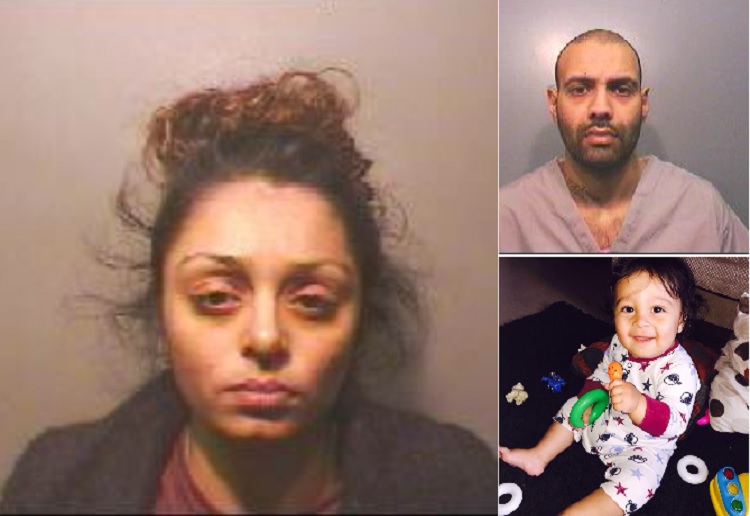 A mother and her partner have been found guilty of contributing to the death of  13-month-old boy, Noah Serra-Morrison.

Ronnie Tayler-Morrison, 22, and Hardeep Hunjan, 27, were convicted by unanimous verdict of charges relating to the death of Tayler-Morrison’s son Noah at the home they shared in the early hours of 21 November last year.

Bedfordshire Police report, Noah died of a massive head injury believed to have been caused by being slammed against a hard surface such as a wall or floor, and had also suffered multiple limb fractures consistent with being twisted or swung. The baby had suffered a total of 24 fractures in his limbs and including his head – some of these injuries were caused during the last six weeks of his life.

Following a six-week trial and a thorough investigation by detectives from the Bedfordshire, Cambridgeshire and Hertfordshire Major Crime Unit, Tayler-Morrison was acquitted of the murder of her son but was found guilty of causing or allowing his death and cruelty by wilful neglect.

Hunjan was found guilty of Noah’s murder and of cruelty by wilful neglect. The pair will be sentenced tomorrow (Friday).

Detective Inspector Fraser Wylie from the tri-force Major Crime Unit said: “Rarely do we come across a case that involves such sheer malice and utter cruelty against a small child, by two people who were supposed to love and care for him.

“Throughout this case the disregard shown by both Tayler-Morrison – Noah’s own mother – and Hunjan has been evident, not least in the fact they attempted to evade justice by attempting to flee to Scotland whilst on bail.

“Poor Noah experienced fear, pain, neglect and extreme brutality during his too-short life. No child deserves that, and it has been evident throughout our investigation and the trial that Tayler-Morrison and Hunjan chose a tumultuous, drug- and alcohol-fuelled lifestyle over his happiness and welfare.

“Little Noah suffered unimaginably as a result of the volatility of his mother’s relationship with Hunjan, who today has been convicted of the little boy’s murder. Even in his death he was denied any dignity by being left to suffer for more than an hour.

“This has truly been one of the most shocking and sickening cases of violence we have ever come across, and I would like to thank my tenacious, dedicated team of investigators who have worked so hard in all hours of the day and night to bring this traumatic case to a resolution. Though nothing can ever bring back their beautiful boy, I hope today’s verdict can bring some semblance of peace for Noah’s wider family.”

Noah’s father, Stefano Coiana released a statement saying, “When Noah was alive he made my life happy. It wasn’t his job to make me happy but he did. He did it by just being here.

He completed my life – he made life worth being here, worth waking up in the morning and worth trying again and again even when I failed.

Noah was the most important thing to me. More than my mum, more than anything. Before Noah was here my life was normal. Not a care in the world other than what to do with myself and my time. But when Noah came it made my life special. I had someone that loved me and I loved him.”

Among her handwritten diary entries in 2015, Tayler-Morrison wrote: ‘I don’t see life without him and as much as this sounds selfish I know that I love Noah but I love H more.’

The Daily Mail reports she also wrote: ‘So he got rude and I left him and bought Noah home. He turned up at my door, strangled me, threw me around, smacked a bottle on my head, broke the fish tank.

‘Called me a wanna be model, slag and lots of other things. I hate him right now.’

The jury was shown another diary entry in which Tayler-Morrison said: ‘I don’t care what has happened all I no is that I still want him.

‘Why am I so crazy about him. I’m sitting on the living floor and all I feel right now is ugly, wasted away, unwanted and unneeded.

‘Just like the few close people I’ve had. One day he will leave me to.’

In graffiti written on the wall of their flat, on Crawley Road, Luton, Beds., the young mum wrote to her boyfriend: ‘My whole life is dedicated to you and ONLY you.’

A post-mortem examination showed his numerous traumatic injuries were wholly inconsistent with a fall from a cot. The osteoarticular pathologist also noted 24 bone fractures in the youngster’s arms and legs and including his skull.

Nine of these injuries were caused during the last six weeks of his life. 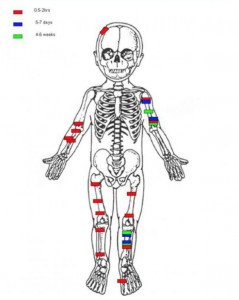 On @BBCLookEast the perverse relationship which led to death of baby Noah #Luton. Mother & her partner both guilty pic.twitter.com/G5ZPMUbkTO