Article Mum accused of ‘abusing’ and spoiling her children 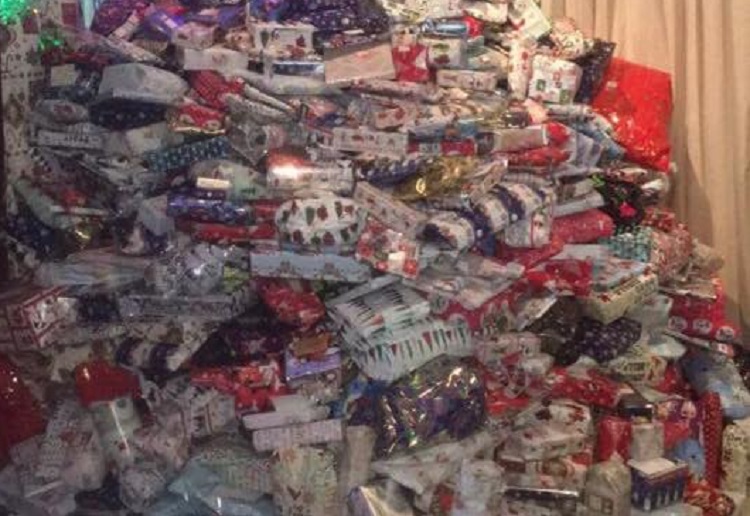 Mum accused of ‘abusing’ and spoiling her children by lavishing them with Christmas gifts.

This year she is going one better and will be making sure they each get 96 gifts – even though they still haven’t used many of the items they were given last festive season, reports Daily Mail.

The 28-year-old, from the Isle of Man, hit the headlines last December after a picture of her Christmas tree with 300 presents piled underneath went viral.

But the mother-of-three said the criticism hasn’t put her off spending lavishly again this Christmas and this year she started her present-buying in July when she armed herself with a suitcase to carry everything home.

Appearing on Channel 5’s Xmas Excess: Parents Splash The Cash, she admitted she’s bought her daughters – teenager Mia and nine-year-old Ella – and toddler son, Tatum, even more presents this year – around 96 each compared to last year’s 87 – as well as getting gifts for her partner James.

Emma said she hasn’t been deterred from her excess spending as she said seeing her children’s faces when they open all their presents on Christmas Day is priceless.

Emma said: ‘When it first happened I felt like I had to stick up for the kids and say they are not spoilt. I felt I had to justify what I was doing, but now I couldn’t give a toss what anyone thinks.

‘I will put a picture of my Christmas tree up this year, if you don’t like it scroll on and it is a good job I am not your mum.’

When Emma shared a picture of her tree last year, it was taken from her Instagram account and circulated with the caption: ‘Nearly time for all the materialistic parents to compete and broadcast how many presents their kids have on Facebook! Just remember theres some children’ who dont get much.’

Emma spoke to news sites including MailOnline and appeared on shows in the UK and USA to defend her spending and to insist her children aren’t spoilt. She said she’s just a ‘normal mum’ who saves and bargain hunts all year in order to have an indulgent Christmas.

She said: ‘If you ask me if I spoil my kids, I say at Christmas yes I do but I don’t throughout the year. They get the necessities, the school uniform, the things they need but we don’t go on holidays abroad or big shopping sprees.

‘Anything they want they get for Christmas.’

However, she admitted she can get carried away at Christmas as she loves the ‘magic of it’.

‘I do go overboard at Christmas definitely. It is loads of pressies, loads of food, stuffing your face, just relaxing having a good day,’ she said.

She revealed she keeps a detailed notebook of all her purchases to ensure all three children get the same amount.

‘This year they have a few more bits – 96 presents each. I am proud of this year’s pile!’

This years tree is pictured below. Emma wrote, “Another year of hard graft, saving and planning. Another year of my family making me proud everyday. They deserve a great Christmas. The haters will hate but nothing and no one will change how I do Christmas.”

Emma also said she is sick of seeing the memes about parents who make Christmas a competition. “Why should parents who graft their arses off be made to feel bad because they buy their kids presents. There’s 365 days in a year to gather some prezzies up. I will NEVER feel bad for giving my kids a good Christmas. LOTS of presents, LOTS of food and drink, LOTS of family time, LOTS of love. If ya don’t like it. Tough shit!”

Do you think it is way too excessive?