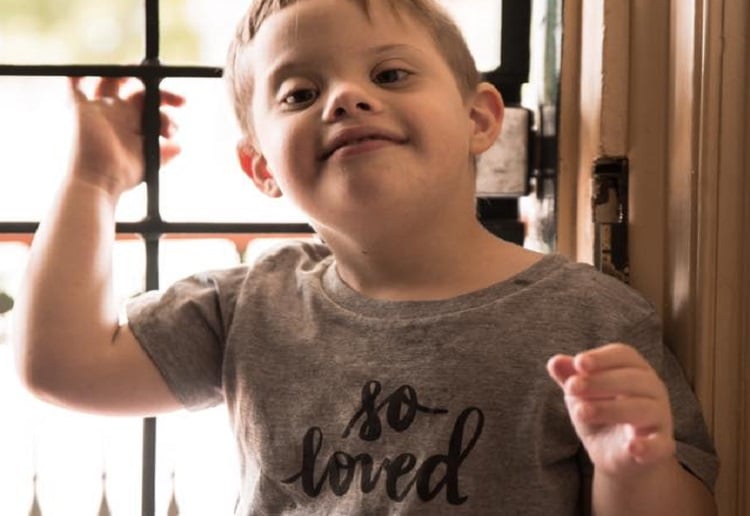 Dear friends list & society at large, “No one can change the world alone. We all play our own, VERY small part.”

Do you know Parker yet? My son has Down syndrome. This is him. Don’t you just love him! How could you not? He’s 5.

Five year old boys are scrumptious little mamas boys with soft cheeks to be kissed, missing baby teeth, and hair that smells faintly of wet dog & your morning coffee from all those cuddles earlier.

When Parker grows up, and he’s out having coffee or doing some shopping, I know you would defend him to the hilt if you walked past him and saw he was being bullied or teased. Right?! Right.

Of course you would.

In fact I think you might even call them out on it, without making it a big deal, if something icky was said but he didn’t catch the comment or rude word himself. You legend. (Thanks in advance.)

In five years, I don’t remember hearing anyone make a deliberately rude or offensive comment in his earshot.

It can often be a bit more subtle than that, in real life. Exclusion, not thinking or being aware, not asking, deliberately ignoring his obvious needs because it makes life a bit trickier sometimes. People don’t like confrontation.

But they DO like staying comfortable. And sometimes, ‘not’ making the obviously needed small accommodation for him here and there is what hurts.

People feel validated by the attitudes they see elsewhere, and they feel entitled to take them into the real world.

Do you know where bullying, hatred and throwaway comments are REALLY obvious, and easily validated to be taken into the real world?

You know those small ways in real life you’ve always defended and stood up for members of society who need you? Those times you thought no one noticed? (Us parents do, we always notice.)

Do it online too, so society is ready for my son when he gets there.

No one can change the world alone. We all play our own, VERY small part.

You don’t need to be a social justice warrior.

But at least don’t defend hurtful comments that parents take a deep breath and call out (after checking left and right for trolls.)

Don’t tell people advocating for themselves or others not to be so sensitive.

Don’t tell them that meanings of words change over time and no one knows what they’re talking about anyway.

Advocating is how the world changes.

It’s not safe or nice.

It’s scary for anyone doing it.

Have their back, don’t shut them down.

At the very minimum, scroll on instead of minimising their efforts just so your own little online world feels safer.

From a mama who is happy knowing her son was born into a world filled with you total legends.