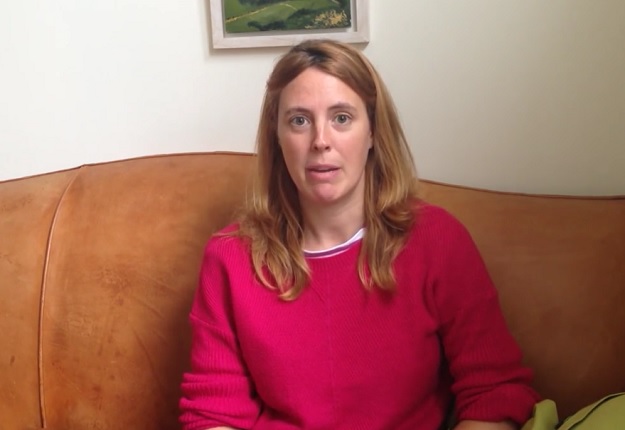 A UK Mother who endured an eighty hour labour was diagnosed with post-traumatic stress disorder and battled to accept her daughter.

Annie Meier, 35, from London, gave birth to daughter Bea four years ago, and thought she felt prepared for giving birth and welcoming her first child.

But what happened during labour was totally not what she had prepared for.

‘I must have been sent home four or five times,’ Annie told FEMAIL. ‘One doctor said: “You’ll probably be in labour in another five days”.

‘By the time I was three centimetres dilated they allowed me to stay, but by that point I’d been in labour a good 50 hours or so and I was exhausted.

‘I couldn’t sleep as I was having contractions every minute and I kept getting sick. I couldn’t keep anything down, including water.’

She was rushed to theatre for an emergency Caesarean.

‘I was really relieved at that point,’ Annie recalls. ‘But once Bea was born, I felt guilty from the moment she arrived.

‘I had not slept for around four or five nights. I knew I was meant to feel this amazing sense of elation and overwhelming love, but I just wanted her taken away so I could go to sleep.

‘That’s where the sense of guilt came from.’

‘From the moment she was born, Bea was really alert,’ Annie said.

‘She just started screaming. The nurses gave her formula because they thought she was just really hungry, but it didn’t help.

‘A few times I fell asleep with her on me because I was so exhausted. People had to come and wake me up.’
‘I just felt numb,’ she recalls. ‘I took the attitude of: “I’ve got to get through this”.

‘If we wanted to sit and eat dinner, I had to leave her to scream.

‘Most of the time I just wanted to run out the door and leave her. I didn’t get any help or support.’

‘I couldn’t get the birth out of my head. I’d recite it to people over and over again,’ she said.

‘I think I couldn’t get over the fact I’d nearly died. Nobody had said it directly at the hospital, but with the haemorrhage I knew that if I hadn’t gone for the Caesarean things could have turned out very differently.
‘I’d always felt in control of my life and now I felt really vulnerable.

‘But overall I was still feeling numb. I didn’t have the time or space to break down and cry over it.

‘It was just a case of deal with the baby and get through the days.’

She recalled one occasion when she went out for a jog at 9pm just for the sake of getting out of the house.

‘I had never felt such an urge to run off into the night,’ she explained. ‘The only thing that stopped me was that I knew my husband would be worried about me.

‘I just wanted to escape and wanted space, but also felt really guilty for feeling that way.’

When Bea was two years old, Annie realised she wasn’t getting any better and said to her husband that she ‘didn’t feel right’.

‘He replied to me: “It’s like a veil of grey has been drawn over you”,’ she recalled.

‘And he was right, it was like I didn’t exist anymore. I had no love for my life left.’

Annie realised something was badly wrong, so she sought counselling through private healthcare.

One day, when her therapist was showing her some notes, Annie saw that she’d written down that she was suffering from PTSD as a result of her traumatic birth.

She saw a specialist in Eye Movement Desensitisation and Reprocessing therapy (EMDR), which helped her unlock the traumatic memories stored in her brain.

‘The therapist was moving their fingers in front of my eyes as I thought about the birth to replace the memories in my brain.

‘I’m not entirely sure how it works, but it did. After two sessions I felt a bit different and after five I was done.’

‘It’s a slow process and you have to give it time,’ she explained. ‘But I’ve started to enjoy her instead of seeing motherhood as a gruelling task.’

Did you or someone you know suffer a similar experience to Annie?  Share your story below.