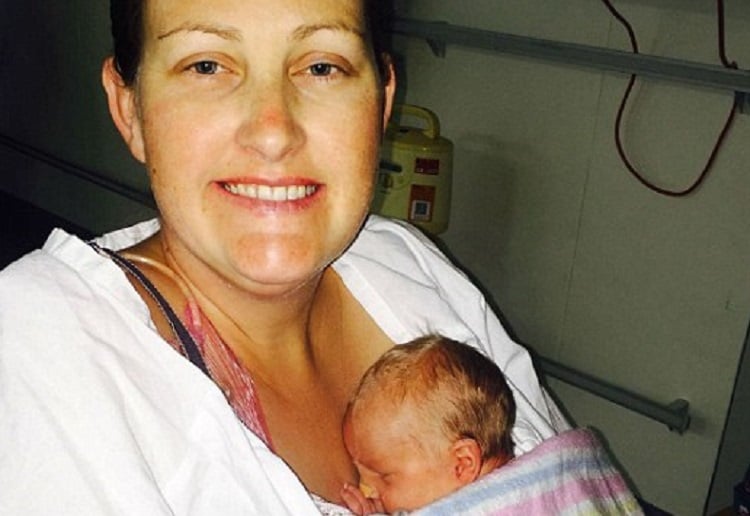 Mum who gave birth to her third child after a high-risk caesarean operation saw the blood drain from her body eight times.

During the operation Ms Parkes received 128 bags of blood through transfusions which entirely exhausted the hospital’s supply.

After the ordeal, Sarah was able to successfully deliver her son Billy, who is now two years old.

‘It was horrific, but I can’t thank the blood donation (service) enough,’ the Coffs Harbour mum told AAP.

While Ms Parkes was aware that her pregnancy was high risk, she never imagined her placenta would attach to her bladder and leave her in such danger.

‘When I got cut open, they hit a major blood vessel and I started bleeding to death,’ Ms Parkes said.

‘My placenta is just pumping blood everywhere and they can’t close me up because my placenta needs to be removed. I had seven minutes left to live. Without a vascular surgeon being next door, I wouldn’t have survived’.

Two years after the delivery, Ms Parkes opened up about the issue in order to raise awareness and emphasise the importance of blood donations.

‘I need to help people. I want people to look at me and think about donating blood,’ she told AAP.

‘Women are also out there choosing to have a caesarean not realising there are more risks. I don’t want it to happen to anyone else’.

One in three Australians will need blood during their lifetime but only one in 30 currently gives blood, she said.

The Australian Red Cross encourages the public to donate blood in order to save lives. Donated blood only lasts for 42 days – which is why the public is urged to donate regularly.

National Blood Donor Week, which will be from the 2nd to the 8th of September, is an annual celebration of the thousands of Australians who donate blood and save lives.

Find out how you can donate HERE.