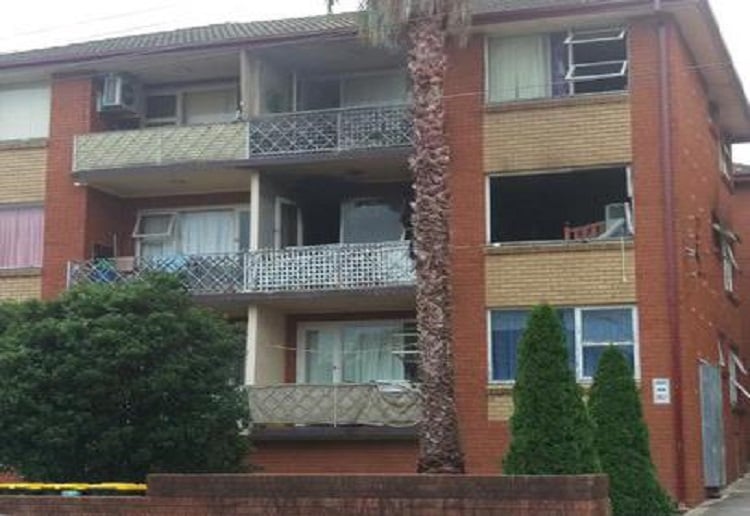 A mother who’s apartment caught fire dropped her two-day-old baby boy and two-year-old toddler out her two-storey window to save them when she was unable to get out the front door.

The 27-year-old women was cooking in the kitchen of her Lakemba unit at 9.30pm on Thursday when the fire started.

When she couldn’t get out the front door, she took her two children to the window, and a neighbour came to her aid.

Senior Constable Jamie Wallace said that she dropped the kids out the window and the man caught them, but the man told Nine News they actually landed on mattresses he’d dragged from his nearby home.

The children were not injured and the woman was rescued shortly after when the firefighters arrived at the scene.

A firefighter at the scene later said when crews arrived they found the woman sitting on the window sill.

“On arrival crews found the second-floor unit was well engulfed in fire; they also located a lady, who was sitting on the edge of the window sill,” he said.

“They also set up an extension ladder and rescued the woman from the window sill.”

She was treated for smoke inhalation and cuts to her feet in hospital.

The fire spread to other apartments and 50 other people were evacuated in the 12-unit building.

ABC reports, Dalila Awachi, who lives next door to the unit block, said she and her husband were watching TV when they heard something explode.

“My husband went there and asked her to stay until we bring some mattresses and some sheets so she can throw the babies, then we called the ambulance,” Mrs Awachi said.

She said neighbours quickly worked together to help rescue the children.

“Other guys came to hold the sheets on all sides and they put the mattress down [on the ground], so the kids can’t be injured,” she said.

Ms Awachi said several mattresses were put underneath the sheet, so the children could have a soft landing, as the mother dropped them down from about six metres above.

“[The mother] was brave. She was very scared, she only came back from the hospital from having her baby yesterday, the baby is two days old,” she said.

“She even broke the window to get out.”

Mrs Awachi said the situation could have been much worse if everyone had not helped.

“She was clever too, she [dropped] the baby on the side of the sheet,” she said.

Thank goodness they are all OK! How scary for them.