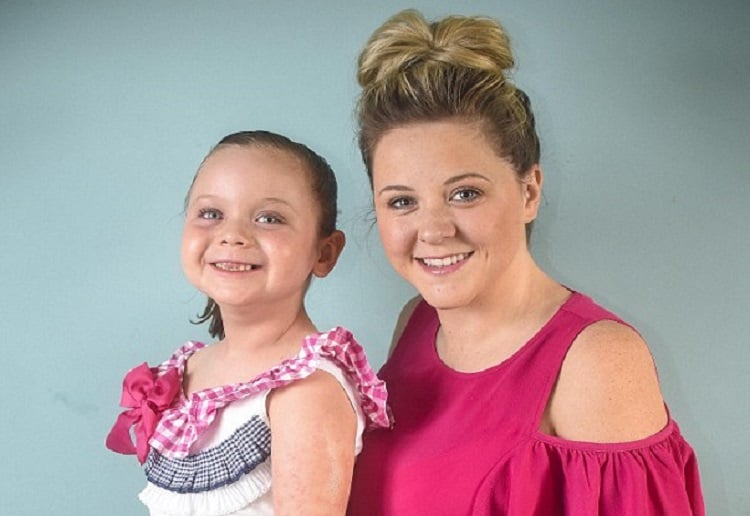 Mum of a six-year-old with a serious skin condition gets a tattoo to match her daughter so she doesn’t feel so alone.

Tarly Poxton has to apply special moisturisers six times a day to keep the symptoms of Netherton syndrome under control.

She was recently diagnosed with the skin complaint which causes blistering, itchy and flaky skin and means she must cover up in the sun, reports Daily Mail.

Her mother, Kory, 25, decided to get inked in a pattern to replicate the symptoms after Tarly asked why both she and little sister Pearl, three, do not have the condition.

The healthcare assistant, from Sprotbrough, South Yorkshire, who is training to be a nurse said the heart-shaped tattoo had lifted her daughter’s self-esteem.

‘When Tarly has a flare-up, she gets really upset and asks me ”Why have I got to have this skin? Why have you not got it? Why has my sister Pearl not got it?”

‘One day, I couldn’t really answer her so I told her ”Do you know what? Mummy can have your skin but it won’t be real”.

‘I contacted a couple of tattooists and got a heart-shaped tattoo on the top of my thigh. It is pink and looks just like her skin and it says ”little me” underneath.

‘Tarly loves it and she’s told absolutely everyone about it, saying that it is just like her skin but pretend.’ 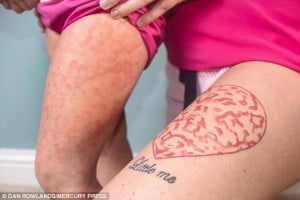 Days after she was born four weeks early, her mother and fiancé Luke King, 25, discovered her skin had blistered and fallen off the bottom of her foot.

She was treated for eczema until she was three before a skin biopsy came up negative for the condition.

She went on to see 12 dermatological specialists in the next three years.

Last month, she was finally diagnosed with ichthyosis, a genetic condition which also means she cannot sweat properly and regulate her own temperature properly.

Ms Poxton said she was relieved to finally find out the real condition which has afflicted her daughter all her life.

‘When I first saw the skin on her foot when she was little, I panicked.

‘It was really, really scary but I would say it was more upsetting than anything else.

‘I was surprised more than anything when I got the diagnosis and I didn’t really believe that we had that answer after all this time.

‘But I trust the doctors and Tarly never moans throughout everything, she completely understands what the condition means for her.

‘She understands that if she misses a cream session then she will get itchy and she never moans about it.’

Ms Poxton has used the Icthyosis Support Group (ISG) to meet other parents and find out more about the skin condition.

Paul Whitehouse, chairman of the ISG said: ‘As a support group the ISG hears of many inspiring stories from our family members.

‘Kory’s tattoo gesture in support of her daughter Tarly is a fantastic way of ‘sharing’ the burden of the condition.

‘This is certainly an usual gesture but one that appears to be reducing the impact the condition has on Tarly.

‘Ichthyosis is a very rare and distressing condition varying in severity and appearance even within the same type.

‘Living with any form of ichthyosis can be extremely difficult but with positive support such as that shown by Kory, the impact on the sufferer can be significantly reduced.’