Article Mum goes into battle over uniform gender equality in schools and WINS! 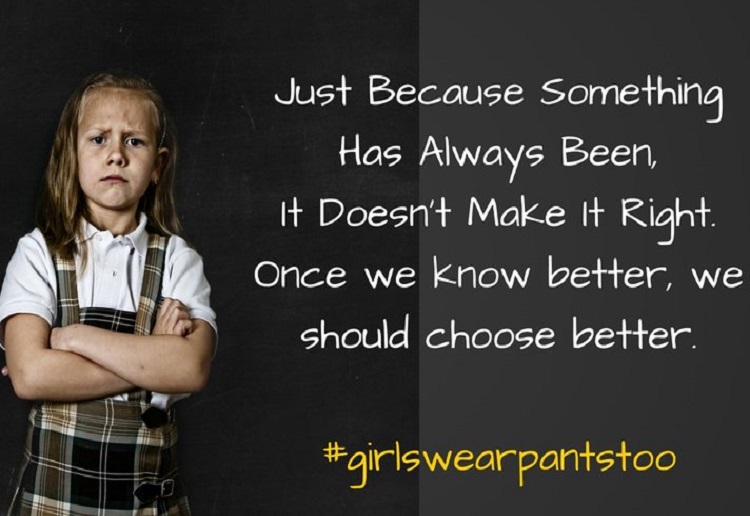 Mum launches an online campaign calling for gender equality in school uniforms, after her young daughter was told she could not wear trousers.

Simone Cariss said it was unacceptable that there was not a pants option for girls at her daughter’s Melbourne Catholic school.

She launched an online petition has already collected more than 3,300 signatures.

Mum Simone Cariss told Kidspot: “The Principal called me today and said she hadn’t responded very well in the first place and that they would form a committee to discuss the changes and then roll them out.”

“I haven’t told Asha yet because she’s at school but she’s going to be rapt,” she continued.

Ms Cariss said her daughter Asha, who is in Year 1, loved the school but found the rule challenging.

“She feels at a disadvantage because she’s wearing a heavy, cumbersome kilt with uncomfortable tights, and if she chooses not to wear tights, she has to wear socks and then she’s cold. So it really is an impractical uniform,” Ms Cariss told 774 ABC Melbourne.

“My daughter is really active; she likes to join in with the boys and the girls at lunchtime playing sports and running around.

“She doesn’t choose to wear a dress at any other time, so she wants to have the choice.”

Ms Cariss said she had been told by the school, who she has chosen not to name, that there was no plan to change the uniform policy.

“I feel there is anti-discrimination legislation out there, and a workplace wouldn’t get away with this,” she said.

“I don’t know how schools are still able to do this and enforce this in 2016.

“What I don’t understand is that it [pants] is an approved school uniform, it’s just not available to half the students. And I don’t think that’s very fair.”

In her petition Ms Cariss writes: “My daughter’s primary school in Melbourne has declined a request for my daughter to wear pants as part of the winter uniform. Pants are approved school uniform for the boys only. Girls must wear a tunic in winter and a dress in summer (apart from sports uniform days).

My daughter, like many other girls, simply wants the choice to wear pants like half of her peers, with the warmth and freedom to be active at school and travelling to/from school. She constantly asks “why can’t I wear pants like the boys?” “Because you’re a girl” is not something I am prepared to say to my 6 year old daughter. A daughter who I have raised to believe she can do and conquer anything, regardless of her gender, and that she can like what she wants to like and not what gender stereotypes dictate she should like.

The Australian Government recently launched a new campaign prompted by alarming research showing girls are only half as active as their male peers by the time they become teenagers. This campaign called “Girls Make Your Move” is a fantastic initiative. However it flies in the face of our young girls who are forced to wear heavy, long tunics and uncomfortable tights in winter and dresses that risk bearing their underwear in summer should they want to be active like their male peers.”