Parents left furious and in total shock after a surgeon accidentally sliced their baby’s head at birth leaving her with a huge scar.

Emma Edwards’ daughter Karmen has been left with a one-and-a-half-inch scar between her eye and ear as a result of the blunder which is now being probed by health chiefs, reports The Sun.

Emma said a locum doctor, who made the incision as part of a caesarean section, later claimed she had not been told that Emma was in labour as she performed the procedure. 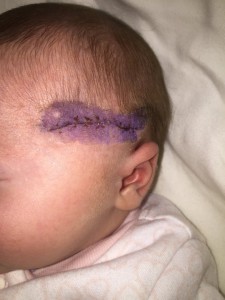 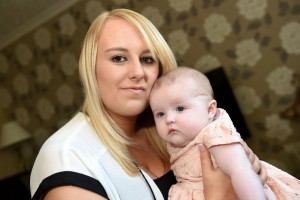 Images via The Sun

Emma has been left traumatised by the incident which had been followed by a series of upsetting delays to the operation.

She was also put through an agonising 24 hour wait for a plastic surgeon to come and stitch her newborn’s wound.

The 21-year-old said the mistake could have had far more serious consequences – and claimed the care she and her baby received had been a “disaster from the start to the end”.

“They rushed her off to SCBU (special care baby unit) because they had cut her head.”

“The surgeon came and spoke to me afterwards and said that it happened because I hadn’t told anyone that my waters had broken and was in labour, but I checked my medical records and it said that I had explained that.”

A health board spokesman said an internal investigation is being carried out into the incident.