Article Mum issues warning to all fellow parents. Be careful! 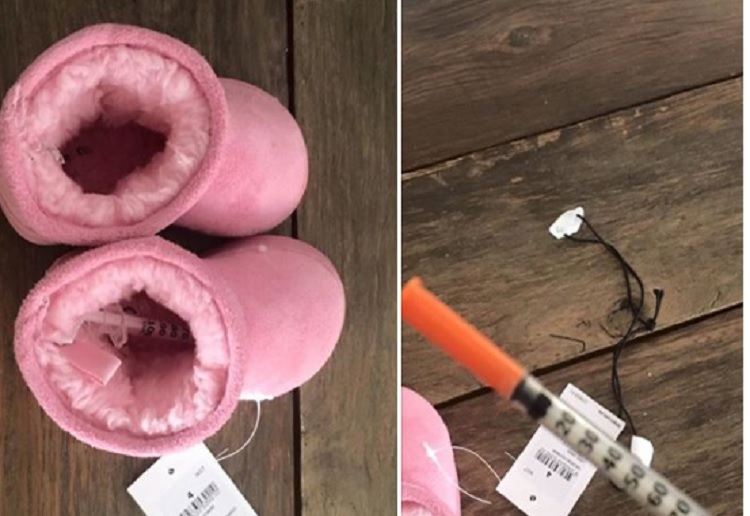 Mum claims she found a used syringe in the bottom of her baby’s new ugg boot.

The discovery has prompted an investigation at Warrawong’s Target store, reports Illawarra Mercury.

Mum of two, Suzi Meyer, purchased two pairs of ugg boots about midday, on Friday, for her daughters Ember, 3, and Raven, 1.

“I was just sticking my hand in to check for any filling some shops use for new shoes, and I felt what I thought was one of those plastic sticks they put in shoes to hold their shape,” Ms Meyer,told the Mercury.

“It was pushed right to the bottom of the boot.

“I pulled it out and looked at it and froze.”

Ms Meyer said the syringe’s pointed end was covered with a cap. A “residue” around the orange lid made her think it was used.

She said she didn’t notice its presence earlier because her daughter hadn’t tried them on in-store and the fluffy lining partially obscured her view of the boot’s interior.

“They are little ugg boots, so they are deep and fluffy,” she said.

“I didn’t think to check for a dirty needle. I will be from now on though.”

Ms Meyer said the company – which had sent a manager to her door to collect the boots and the syringe – was not to blame.

“I’m not wanting to put any blame on Target, they have been lovely about it,” she said.

“They replaced the shoes and gave my daughter a couple of little toys, which was very nice.

“They said they’ve done a sweep of the whole store and quality control would be contacting me.

“I simply want to put the word out for people to watch out and check the shoes.”

Ms Meyer called on whoever left the needle to “think about your actions”.

“Why would you do this to a small, innocent child?” she said.

“They could have hurt themselves and had something that could stay with them for them for the rest of their life.”

Well that’s concerning! Have you ever had a similar experience?