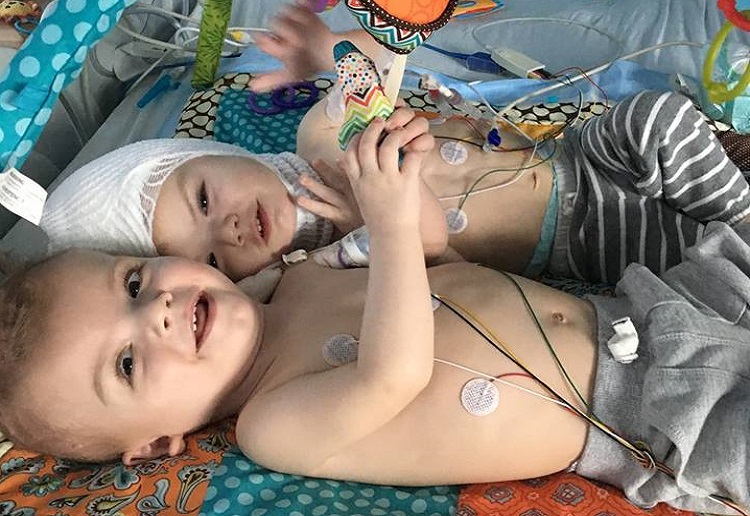 Mum of conjoined twins who were successfully separated after a 20-hour operation has shared an amazing video update.

The story of Anias and Jadon McDonald, 13-month-old boys who were conjoined at the head, become a national sensation in recent months, reports Daily Mail.

The boys have been recuperating with their parents at Montefiore Hospital, showing vast improvements.

Nicole posted the first video of the boys together. The adorable clip shows the boys cuddling – something they could never do before – and speaking.

‘Dada’, Jadon gargles at the camera and Anias wraps his arms around him.

So amazing to see!

Nicole McDonald wanted to make sure the world knew the stories of the doctors, nurses and hospital staff who changed their lives – and hers.

Anias and Jadon had their life-threatening operation at Bronx’s Montefiore Hospital, a place that Nicole calls the ‘best second home we’ve ever had’.

Nicole said that neither she nor her husband Christian initially wanted to go public with their story, until they realized it would provide the chance to give credit to the people who saved their sons.

The mother-of-three has been flooded with supportive messages on her Facebook, but Nicole now wanted to turn the attention ‘back to the true heroes of our story’.

‘The real heroes of this story are the people who have put countless hours, days and months into the success of today,’ she began in her Facebook post which has received over 16,000 reactions so far.

That first hero was Dr James Goodrich. Nicole recalled speaking to him for the very first time on a holiday, when he returned her frantic voicemail asking that he help her sons.

‘He spent over an hour going through all of the details from the previous surgeries he had done,’ she wrote.

‘I knew he was the one from the beginning and I’ve never regretted it since.’

‘I truly believe that not only is he the most interesting man I’ve ever met, but he’s also the most giving and humble too.’

‘It’s because of this great man my babies are in their own beds today.’

Nicole then thanked Goodrich’s nurse practitioner, a woman named Kamilah, who she called her ‘go-to woman’ who had been ‘nothing short of extraordinary’.

‘She answers all of my calls, even at midnight,’ Nicole wrote. ‘She’s beautiful and caring and kind.’

Nicole then thanked the boys’ plastic surgeon Dr Tepper, and his practitioner Martine, for tirelessly planning the reconstruction of her sons’ heads, and their anesthesiologists Dr Kahana and Dr Mann.

‘These two are true unsung heroes,’ she added of the latter.

Nicole also thanked the entire staff at the hospital’s pediatric ICU unit, ‘from the attending doctors to the janitors’.

‘These people are the ones who dealt with us on a daily basis,’ she wrote. ‘And always with a smile.’

This is not a hospital, its a community. Everyone knows each other by first name. The caregiver support center in the heart of the hospital was my sanctuary.’

Nicole then expressed her gratitude to everyone who donated and to all her relatives who came to visit and help take care of her eldest son Aza, whiles he and Christian took care of their twins.

Then she thanked Christian, who Nicole revealed ‘gave up so many dreams, so many goals’ to become a stay-at-home father to Aza while Nicole took the twins to the hospital.

‘He makes me laugh when I’m crying,’ she wrote. ‘He picks me up off the floor when I just can’t seem to go on.’

‘And his eyes…the way he looks at all of our boys…it’s so touching. His heart is enormous.’

‘Marriage through a trial like this is not easy. But everyday he still wakes up and chooses to love me…and that’s saying something.’

‘I love him with all I have and then some. There is no one else I would want to go on this journey with.’

Nicole then dedicated a paragraph to her son Aza, her ‘precious little boy’ who ‘just rolls with the punches’.

‘At the age of three, he has moved four times,’ she wrote. ‘He went from having mommy every day to really only seeing me at night time. His heart is just like his daddy’s…full of love.’

‘He LOVES his babies and has never once noticed their connection. He just lays his head on them like I do to hug them, hands them their toys, and gives them their pacifiers.’

‘There are so many times I would come home from the hospital, totally exhausted, and he says “mommy hold you” because he wants me to snuggle him. What he doesn’t realize is that he’s holding me.’

Nicole then revealed that her ‘biggest hero’ was God, who she thanked for ‘guiding every single step of this process’ and ‘bringing together the perfect group of people to make a miracle happen’.

The conjoined twins  have opened their eyes and are sleeping in separate beds for the first time since their operation.

On Monday Jadon had opened his eyes, with Mrs McDonald posting a touching update on Facebook.

“My Jadon, in your eyes I found the spark that reignited my hope. Hello, brown eyes, I’ve missed seeing you see me.”

Mr McDonald told CNN his son was improving every day.

Mrs McDonald was able to cuddle up next to Anias on his single bed for the first time since the surgery.

Doctors are expecting Anias’ recovery to be slower than Jadon’s, as he was born with breathing issues and often had seizures,

“We knew Anias would struggle more, but he’s progressing at a slower rate, but still moving forward and there’s still so much hope for him,” Mrs McDonald told CNN.

In an emotional post on Facebook, Nicole McDonald described how it was always her goal to be able to rock her 13-month-old son Jadon – something she could not do when her sons were conjoined at the head.

‘For over 13 months, I’ve dreamed of this moment,’ Mrs McDonald wrote. ‘I looked down at Jadon’s angelic face and saw him in a way I’d never seen him before. He whimpered for almost the whole two hours I held him because he had just been extubated, had the area under his scalp washed out and had been weaned from the good pain meds.

‘But instead of wrapping my body around him in his bed, I wrapped my arms around him and rocked. One of the most profound moments of my life.”