Mother of murdered teenager, Tiahleigh Palmer, has launched an online attack against a young couple who gave their newborn baby the same name as her daughter.

Cyndi Palmer said Tiahleigh was a name she had invented for her daughter “specifically” and she was “beyond wild” a child born since her death had been given the same name, reports news.com.au.

In May, Tiahleigh’s foster father Rick Thorburn was given a life sentence for the 12-year-old’s murder.

She claimed they had agreed not to call their newborn child Tiahleigh, but they then appeared to have done exactly that.

“Little f***ing teenagers who think it’s fun to have babies … and then name that kid after my deceased daughter to whom they weren’t even friends for what I can only think of as attention!” she wrote.

“That wasn’t their name, that was Tiahleigh’s family to use if they chose to. That name isn’t random or common name, that name I made for Tiahleigh specifically.”

Cyndi went on to say she had contacted “the kids” and had received assurances they would not use the name Tiahleigh. 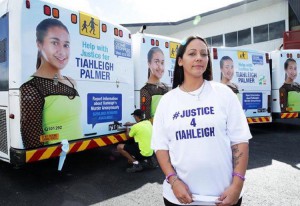 “Now the baby is born and boom. I’m beyond wild. If this was my child there would be no way I would let my child name a baby after someone who has passed, especially under such horrific circumstances.”

Some in the group didn’t share Cyndi’s fury and pointed out many children had similar sounding names.

One person called Cyndi out and said he had “no ownership” over the name and was “spreading hate to teenage girls”.

But Cyndi was having none of it. “Old enough to have a baby, old enough to be called out,” she replied. “They said they would change it which is why I am so upset.”

Does anyone really have rights to a name? (I do think they could have spelled it different out of respect)