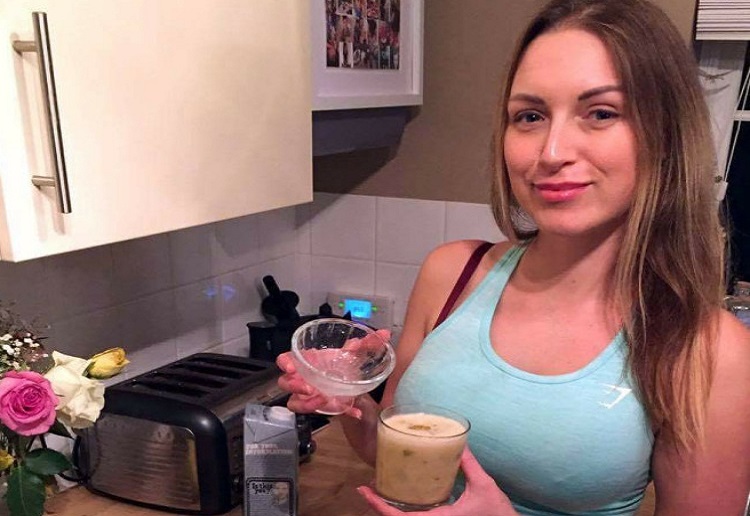 A UK mum-of-two claims she beats the flu by drinking sperm smoothies. Yes. You read that right.

Tracy Kiss, 29, puts a spoonful of her best friend’s donated semen into her drink every morning in a bid to boost her immunity, reports The Sun.

Single Mum to Millicent, nine, and four-year-old Gabriele, has said: “I’d been feeling run down and had no energy, but now I’m full of beans and my mood has improved.

“It can taste really good – depending on what my friend has been eating. My other mates think I’m strange, but I don’t give a toss.”

Tracy, who is a vegan, roped her 31-year-old single pal into giving her his semen. He comes round with a fresh tub three times a week.

“I know he’s healthy, doesn’t smoke, drink or do drugs and I made him have an STI check,” she said.

“When I first approached him, he was concerned I’d use it to impregnate myself.

“But once I’d convinced him it was for my beauty regime he agreed – after all, he has a regular supply at hand!”

Tracy, a qualified nutritional adviser, has been drinking it every day for the past month and stores it in the fridge alongside her weekly shop.

She mixes the semen with fruit, seeds, coconut or almond milk – but is also happy to drink it on its own.

“Every batch tastes different, depending on what he’s been eating,” she said.

“If he’s been drinking alcohol or eaten something particularly pungent like asparagus, I ask him to give me a heads up so I know not to drink it neat.

“Things like pineapple and peppermint make it taste better, but I’ll happily take it straight off a spoon usually.”

Tracy has filmed a YouTube video where she talks through her unusual remedy and explains what it tastes like.

“We look at its smoothness and texture, discuss its benefits and then I show people who I use a teaspoon to eat the sperm,” she said.

“Sperm is an awesome product and we should stop being so ridiculous about it – the health benefits have been well researched and more women and men should take advantage of it particularly as its made by our own bodies and doesn’t contain e-numbers and chemicals.”

It has been reported that one teaspoon of semen contains over 200 proteins and several helpful vitamins and minerals including vitamin C, calcium, chlorine, citric acid, fructose, lactic acid, magnesium, nitrogen, phosphorus, potassium, sodium, vitamin B12 and zinc.
While amounts of each vitamin vary with age and relative health of the obliging male, there is usually a significant amount of zinc present which is an antioxidant that helps slow down the aging process.