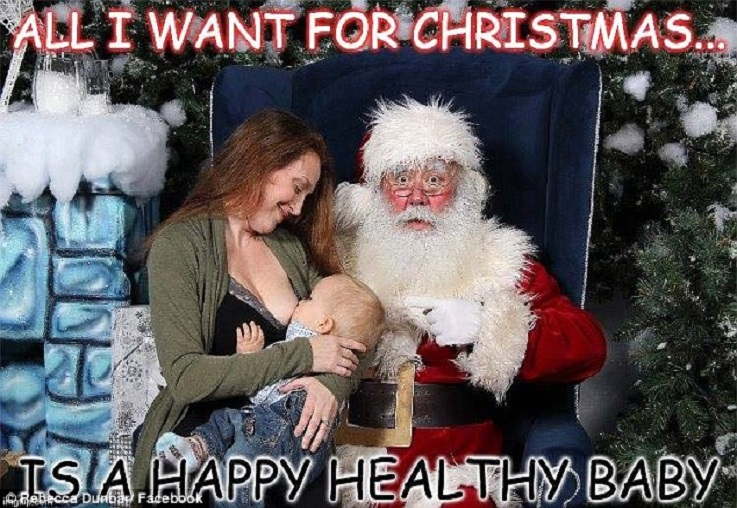 Mum receives negative comments after she shared an image of herself breastfeeding her baby son while sitting on Santa’s lap.

Rebecca Dunbar, 40, stood waiting in line to get a picture taken with Santa when one of her twins began.  She did what any mum would and began nursing him to settle him down.

She was still feeding when it was their turn to meet Santa so they both sat on his lap and continued to feed.

Rebecca said “We asked the photographer and he was comfortable with it because he has two children and they both nurse.’

‘Santa said: “I’ve never been asked that in 40 years so why not?” So we took the picture,’ added Rebecca.

‘Honestly, we were just in line and my little guy, who has the patience of nothing, decided he was hungry in about two seconds,’ she told Global News. ‘He would have just screamed the entire time so I started nursing him. And we were next in line.’

Rebecca shared the image on her Facebook page and most of her friends liked the photo, but sadly some other people found it unnecessary and even offensive. .

‘I posted it just as another picture of how great breastfeeding is, but it was a bit tongue-in-cheek and silly. Santa looks silly,’ she said.

‘I’ve seen a lot of negative comments on social media which is disappointing for to see,’ said Rebecca.

One woman wrote on Facebook: ‘What a crock. Mothers know full well that babies get hungry and require feeding probably every couple of hours.

‘She could have either found a quiet spot… or she could have pumped breast milk first and put it in a bottle in case her baby got hungry. Instead, she decided to act like an exhibitionist.

Another person commented: ‘Of all the the stupid publicity grabs by attention-started cows, this one is the worst. Obviously this self-centered crybaby doesn’t give a thought to how the poor gentleman playing Santa must feel – no, she and her self-important agenda come first.

Rebecca has since made her Facebook profile private due to the negative comments, said she doesn’t regret taking the photo and would take it ‘a million times’ again, but feels sad about the criticism she’s received.

‘I think breastfeeding should be made more acceptable in all ways. It shouldn’t deserve a comment one way or another because it shouldn’t be seen as abnormal,’ she said.

‘I think breastfeeding is absolutely beautiful and I was very positive about it. The fact that people have been so negative is a little upsetting. But everyone has an opinion,’ Rebecca added.

I think this is one of the BEST Santa photo’s I have seen this year and there are some awesome ones around.