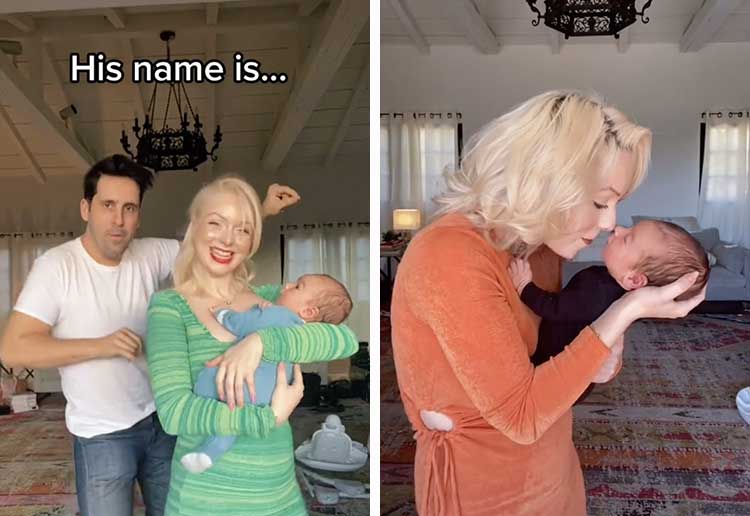 When popular online star Jasmine Chiswell and her husband Maverick McNeilly revealed their baby’s unique name, they expected people to either love or hate it. But what they didn’t expect was threats on their lives.

Jasmine, who has almost 15 million TikTok followers, rose to fame for her vintage style and love of Marilyn Monroe. So when she announced her pregnancy, there were literally millions of people invested in her journey. Their baby boy arrived in mid January, but the couple has only just revealed his name.

In a video that’s been viewed more than 20 million times, Jasmine and Maverick announced their baby boy is named Midnight.

@jasminechiswell Our Baby’s Name Reveal! His name means so much to us ❤️???????? @maverickmcneilly ♬ original sound – oscarwylde

The name immediately polarised her followers, with some gushing over it, while others couldn’t hold back their distaste.

Here’s a snapshot of some of the comments:

“It’s a cool name but I already feel bad for him he’s going to be bullied for it.”

“Girl I love you but that’s gonna be the hardest thing to take seriously in a job interview.”

“Some of these babies growing up to hate their names and their parents for it.”

It prompted Jasmine to address the comments, admitting the new parents had been worried about sharing their boy’s name.

“My husband and I were nervous about sharing his name online, but with everyone asking, we thought, ‘Ok, it’s time, let’s do it’. So I made a video and I posted it two days ago and the comment section was, oh my goodness, brutal. My husband and I absolutely love the name and we aren’t going to change it, but the comments literally were bullying my three week old son. And I just don’t think that’s right.”

Incredibly, Jasmine also revealed that she and her husband have had people threatening their lives over the name.

“To be honest, it made me really, really sad. People are also sending my husband and I death threats, through DMs, just over my baby’s name. Which I think is extremely unfair and not ok. We didn’t expect everyone to like the name. It’s one of those names you either love it or you hate it. But please be kind and if you don’t like it, just please scroll by.”