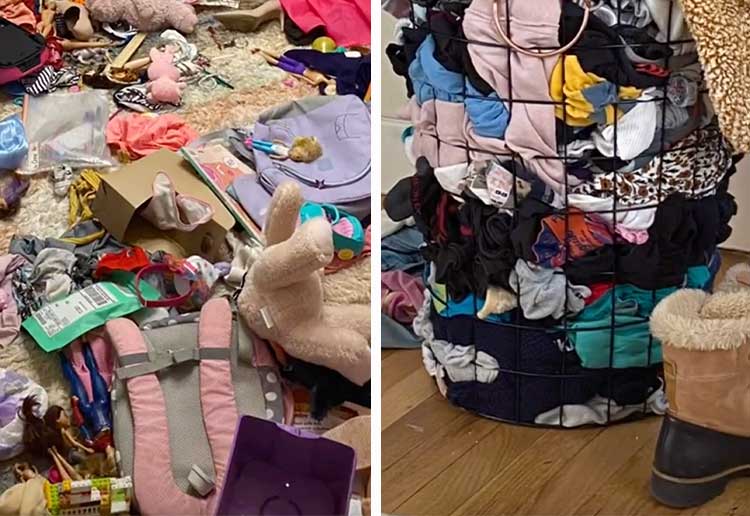 A mum-of-two has revealed the state of her house as she battled debilitation morning sickness, while still looking after her two young daughters.

Emily Boazman shared a video of her house, strewn with toys, laundry, food and craft supplies – a byproduct of her daughters doing pretty much what they liked, while all she could do was throw up.

“Actual footage of my house while I had hyperemesis gravidarum and my two young daughters basically raise themselves while my husband was at work,” she wrote.

“They made MASSIVE messes and I could literally do nothing except lay there and throw up.”

Hyperemesis gravidarum (HG) is a severe form of morning sickness, that can even lead to hospitalisation. It can cause dehydration and weight loss, but there are still many women who have never heard of it, because it only affects between 0.3 and 3.6% of pregnancies.

@emilyboazman Anyone else have HG? My husband did his best when he got home from work but everyday it would just get filthy again. HG is SO INTENSE.???????????? #hyperemesisgravidarum #morningsickness #reallife ♬ Mission Impossible Theme (Movie Trailer Mix) – Dominik Hauser

“I’ve said it a million times and I’ll say it again … there needs to be more awareness and treatments for HG!,” wrote one mum.

“I had hyperemisis with my son. It’s as close to death as I ever want to be. I thought I was going to die,” said Chelsea Bowling.

‘You need a new husband’

While the video was meant to help educate other mums, and normalise HG, some took Emily’s husband to task for not helping more.

“Honestly I have a hard time believing this is your husband’s best,” wrote one commenter. “And if so, you need a new husband.”

Emily responded with another video, saying her husband was a ‘rockstar’. “Every day he would come home for lunch, make the girls food, check on them, go back to work, come home from work, make us all dinner, get me whatever I needed because I was literally vomiting my life away.

“Then he would try to clean up areas of the house. But no matter how much he cleaned, when a five and a three-year-old are by themselves every day, because I was no capable of anything, they’re going to make each room a disaster, and they did.”

Emily says she eventually started to feel better at around 21 weeks pregnant.

Did you suffer from severe morning sickness? How did you cope? Let us know in the comments below.