Mum shares the moment doctors told her a rare complication with her umbilical cord could kill her and her unborn baby boy.

Megan, from Sydney, was  30 weeks when she went to the Campbelltown Hospital for an appointment with her midwife, the first-time mum discovered her unborn son’s umbilical cord had formed a knot and she was going to have to give birth early.

Despite being told to come back the following week for her appointment, a midwife quickly became worried when she noticed Megan had very high blood pressure.

‘I knew something was up. She changed blood pressure cuffs and asked me to pee in a cup again. She checked my reflexes and there was a sense of urgency in everything she was doing. This was nothing like any of my other appointments,’ Megan wrote.

‘It looked like I was definitely not going to work, it might be time to face the fact that there really was going a baby in my life, probably much sooner than expected.’

Doctors rushed Megan to Liverpool Hospital after scrambling to find an available bed and she said specialists came to speak to her about the risks of having a premature birth, reports daily mail.

‘They said because I was having a boy he was 50 percent less likely to survive as ‘Boys don’t fight’ and he will require oxygen which may later affect his vision, and if I didn’t get the second steroid injection he would have under-developed lungs…you get the picture. As you can imagine, I was freaking out,’ she said.

Immediately after Megan gave birth to Cooper, who weighed only 1,060 grams, she said he was taken away to the NICU, where doctors found out the umbilical cord was tied in a “true knot”.

The rare condition had caused her placenta to calcify while Cooper was in the womb, Megan said.

‘He was just so, so tiny – and kind of see-through! Of course, there were a few setbacks, but he kept on surprising us and the staff,’ Megan said.

After more than eight weeks in the hospital, Cooper was still so tiny he could fit in one his dad’s hands by the time he could finally go home.

The small little boy is now 10-years-old and grown into a confident kid, Megan said. 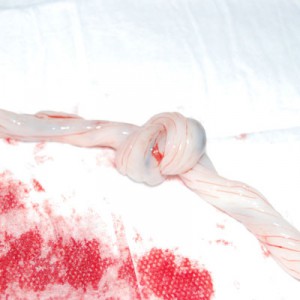 True knots of the umbilical cord are formed when the baby moves through a loop or loops of cord while being active in the uterus, and most form very early in the pregnancy.