Bethanie Millar rushed to hospital after her waters broke and she discovered they were green.

By the time she got there, her baby didn’t have a heartbeat and Bethanie needed an emergency C-section.

Bethanie, who was 21 at the time, said: “I was awake when doctors told me they couldn’t detect a heartbeat, I was so scared.

“I then went straight into an emergency C-section, it all happened so fast.

“When I came round, my mum and sister were by my bed crying.

“I knew something bad had happened, but I was so out of it I thought I was still pregnant.”

Evelie was born without a heartbeat, and doctors spent a heart-wrenching eight minutes trying to resuscitate the baby, The Mirror reports.

But just when they’d given up hope, Evelie’s heart started beating on its own.

Bethanie, who also has daughter Mila-Beau, aged two and a half, said: “When they said her heart started beating on its own I couldn’t believe it.

“I thought that was it, that everything would be fine, but it was far from over.

“I couldn’t even see her, she had to be transferred to Stoke-on-Trent and I wasn’t allowed to go with her.”

Evelie who was born weighing 3.65kg, spent nearly three months in hospital , and when Bethanie was finally able to get up to Stoke after being discharged, doctors told her Evelie might not make it.

The mum-of-two added: “Doctors said she’d be a vegetable. I couldn’t stop crying.

“They said she wouldn’t be able to see, hear or move.”

Bethanie’s mum, Nikki Millar, was at the hospital when doctors delivered the devastating news.

Nikki said: “I know they were just doing their job, but they told us Evelie wouldn’t be able to move, or feed or have any quality of life.

“We’re a positive family, but they took all our hope away from us. There wasn’t even a glimmer left.

“We came home that night and couldn’t stop crying.”

“They did an MRI scan, and she just started to improve.

“It’s like she’s defied everything. I was never really a believer until Evelie.” 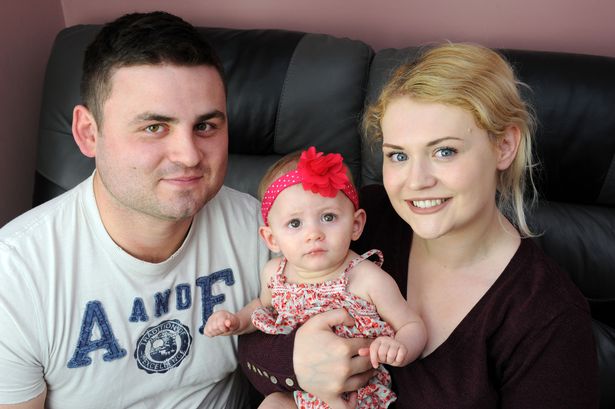 Bethanie said: “She really is amazing. I still look at her now and just cry.”

“She sits up, she’s happy – she even clapped her hands before she was supposed to.

We wish little Evelie all the best.