Article A bond that started with “Hi old person! It’s my birfday today!” 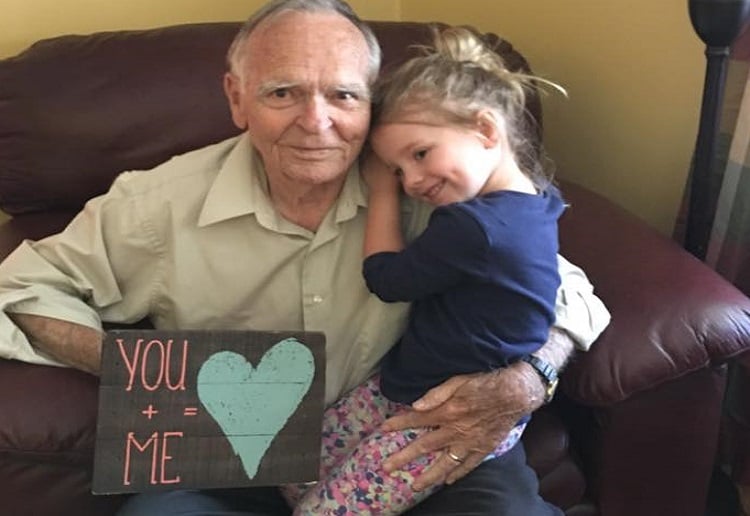 Mum shares the time her four year old daughter talked to a stranger who is now like one of the family.

Tara Wood shares on TODAY the time her four year old daughter welcomed a total stranger into their fold.

Tara writes, “During a trip to the grocers on the day of Norah’s fourth birthday she excitedly waved to a fellow shopped and gleefully proclaimed, “Hi old person! It’s my birfday today!”

“The man was elderly, stone-faced, and furrow-browed. However, before I could “Shush” her for calling him an “old person” or ask the Earth to swallow me whole, he stopped and turned to her”, explained Tara.

“If he was troubled by my no-filter-having child, he didn’t show it. His expression softened as he replied, “Well hello little lady! And how old are you today?”

They chatted for a few minutes, he wished her ‘Happy Birthday,’ and we went our separate ways.

A few minutes later, she turned to me and asked, “Can I take a picture with the old man for my birfday?” It was the cutest thing ever and, although I wasn’t sure if he’d oblige, I told her we’d certainly ask.”

We found the man a couple of aisles over and I approached him. “Excuse me, sir? This is Norah and she’d like to know if you’d take a photo with her for her birthday?”

His expression rapidly morphed from confused to stunned to delighted.

He took a step back, steadied himself on his shopping cart, and placed his free hand on his chest. “A photo? With me?” he asked.

“I pulled out my iPhone and they posed together. She placed her soft hand on top of his soft hand. He wordlessly stared at her with twinkling eyes as she kept his hand in hers and studied his skinny veins and weathered knuckles. She kissed the top of his hand and then placed it on her cheek. He beamed. I asked his name and he told us to call him “Dan.”

“After a few minutes, I thanked Mr. Dan for taking the time to spend a bit of his day with us. He teared up and said, “No, thank YOU. This has been the best day I’ve had in a long time. You’ve made me so happy, Miss Norah.”

Tara explains, “They hugged again and we walked away. Norah watched him until he was out of view.

I posted the story on Facebook and a photo of the two of them.

Later that night, I received a private message from a local reader who recognized Mr. Dan.

His wife, Mary, had passed away in March and he had been lonely since his beloved had gone. She wanted to let me know that she was certain his heart was touched by my little girl. That he needed it and it likely would never forget it.

I asked for his phone number and called him a few days later.”

“We made a visit to Mr. Dan’s cozy and tidy house. He’d set out a child’s table, blank paper, and crayons out for Norah. He asked if she’d draw some pictures for him to display on his refrigerator. She happily agreed and went right to work.”

Mr. Dan thinks about Norah, too. After another recent visit, he relayed that he hadn’t had an uninterrupted night’s sleep since his wife died. He told me that he has slept soundly every night since meeting my girl. “Norah has healed me,” he said.

Norah and I have made a promise to see Mr. Dan every week — even if it’s only for fifteen minutes, even if only for a quick hug and to drop off a cheese danish (his favourite!).

I’ve invited him to spend Thanksgiving with us. He’s part of our family now. Whether he likes it or not, he’s been absorbed into my family of nine and just like Norah said, “we’re gonna love him all up.”

Sometimes talking to strangers can lead to beauty full new beginnings. Give it a try.”

Such a beautiful, uplifting, story.

Have you ever welcomed a stranger into your family?