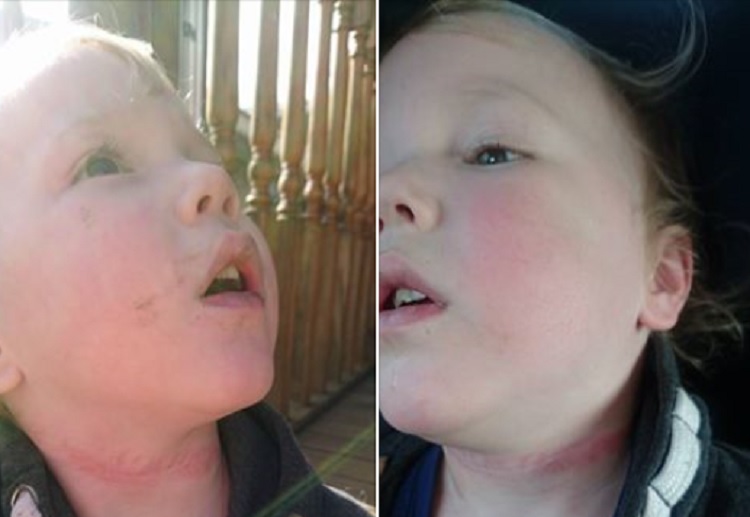 Blogger and mum of four The Troublesome Tokley’s wants to warn other parents of a near fatality.

“Today’s playdate could of ended in tragedy, today I could of lost my Zayden”, she writes.

“I’m a helicopter parent as some call it, I hang around as they play not just to make sure are playing nicely are safe etc but Zayden also gets hurt often due to his cerebral palsy hence the chipped teeth, constant bruises splitting head open.

We were watching them play outside, being kids having fun they were ‘building’ banging things against verandah posts and vibrations must of made a hook come out.

The cord from Cafe blinds dropped and in a fright Zayden was tangled and pulling, the photos show soon after and 4 hours. If I wasn’t watching it could be too late. how is another 3yo to know isn’t playing but hurt and to get help without proper supervision .

Please watch your children, watch their surroundings. My cords are tied up from blinds etc I know other parents are mostly but nothing can ever bring them back if it happened. It was seconds I was watching him and his still been left with bruising to not only neck but broken blood vessels and been told to watch for signs of bruising to windpipe.”

She added “It was seconds, the cord dropped and he stepped into it turned and panicked the few steps away I was, was long enough to be tight accidents can happen so fast.”

The following day she added, “Zayden is all fine, apart from few days for marks to settle down. Drs were happy that delayed swelling didn’t occur in sleep, he is eating, drinking, flirting away like normal. We really appreciate all the positives. It took me many hours to fall asleep due to all the what could of beens thru my mind.”