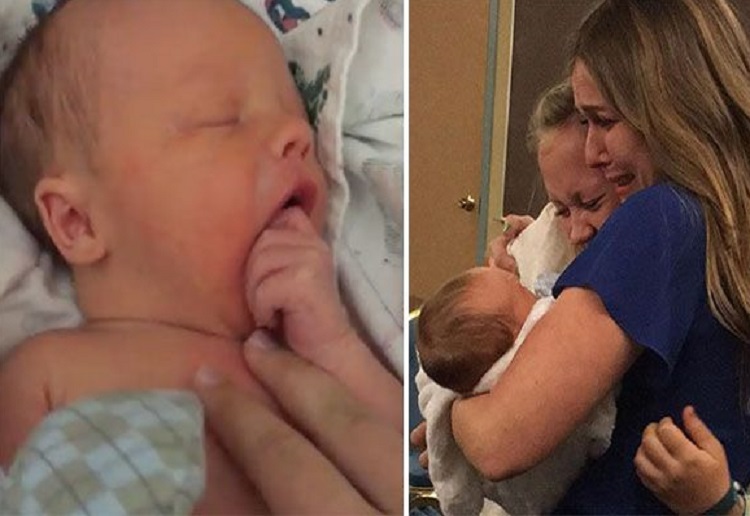 A US mum has shared an emotional message for her baby boy that she gave up for adoption.

Hannah Mongie of Utah fell pregnant in 2015 and gave birth to her boy Taggart on March 21, 2016, USA Magazine reports.

In a YouTube video filmed in March 2016, but only recently posted online, the devastated mum fights back tears as she explains her reason for having to give up her little boy.

Ms Mongie explains she met Tagg’s father Kaden in 2013 before she fell pregnant with his child. She was 18 at the time of her pregnancy and Kaden was 20.

“And he loved you so much from the very, very beginning,” she tells the bub.

“And at my eight week appointment with you I heard your heart beat for the first time. Your daddy wasn’t there for it. He was in class. So I texted it to him and he ran out. He was so excited to hear it.”

Ms Mongie explains the couple were excited for Tagg’s birth, but were soon hit by tragedy.
“Two days after he heard your heart beat his heart stopped,” she says.

“From the day your daddy died I had a hard time even considering placing you with a different family when you were my last piece of Kaden.

“But one day I just woke up and knew you were supposed to be with someone else.”

“I just wanted to let you know that I love you and I made this decision completely out of love and if I didn’t love you I wouldn’t have been in this position at all and you wouldn’t have this awesome family.”

“I love you Taggart Kaden Marsh.”

Her video has been shared on the Love What Matters Facebook page and attracted over 2 million views and 62K reactions.