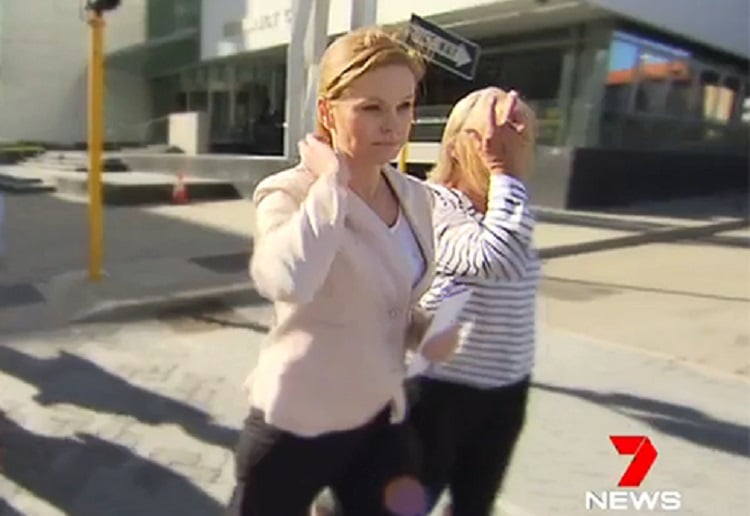 A witness testified a young girl nearby was distressed and said: “I don’t want my mummy to go to jail”.

A Perth jury has heard how panicked mothers searched for their children after a woman allegedly stabbed her ex-husband at a suburban park.

Mark Fernandez was left with his intestines hanging out and needed 243 stitches to his upper body and hands following the altercation with his former partner, Michelle Allison Fernandez, reports 7 news.

Ms Fernandez is accused of repeatedly stabbing Mr Fernandez with a 20cm kitchen knife in front of their young daughter near the playground at Shelley Foreshore in October 2015.

“It was a very guttural, scary scream,” she said. “Literally every mother at the park was calling for their kids.”

Another witness phoned triple-0, telling the operator: “We’re not sure who stabbed who, but there’s a lot of blood.”

In a later call, the same witness told police: “The mother involved said he came at her with a knife and there was a tussle and he’s in a bad way.

“He’s been stabbed in the stomach. I think it is with the knife that she tried to get off him.”

A bystander claimed Mr Fernandez had been playing enthusiastically with his daughter in the playground.

She said when he had started screaming for help, her first thought was that he was joking.

Ms Fernandez claimed it was her former husband who brought the weapon to the park and she acted in self-defence because she feared for her safety.

Michelle maintains she acted in self-defence when she stabbed Mark Fernandez at least twice the WA District Court heard on Thursday, reports 7 news.

The mother-of-two was found guilty by a jury of causing grievous bodily harm, but insists she did not bring the knife and is not guilty of the crime.

She has been jailed for at least three-and-a-half years.

Judge Michael Bowden accepted the 43-year-old did not form the intention to stab her former partner in front of shocked onlookers, including young children, until shortly before it happened.

“It was traumatic, it was a brutal attack, it occurred in a public park and in essence in the middle of the day,” he said.

“There were other people, children as well, present at that park.”

“If medical intervention had not have occurred it was very likely that the victim would have died,” Judge Bowden said.

Judge Bowden noted Fernandez had no prior record, had a supportive family, and was highly thought of by workmates and friends, who described her as calm, generous and trustworthy.

More than 60 character references were handed to the court, describing the Perth mother as a caring woman who wasn’t violent.

“It’s not in dispute, and it’s confirmed by the references and evidence given at the trial, that you’re highly competent in your profession,” he said.

“You’re caring, compassionate and very professional in your work as a clinical nurse.”

Judge Bowden also noted Fernandez was unlikely to reoffend, but said she had traumatised the victim.

He also said he was satisfied Michelle Fernandez was the one who brought the knife to the scene, after the former couple agreed to meet to discuss their children.

Fernandez was sentenced to more than five years in jail, and must serve three-and-a-half years behind bars before she can be eligible for parole.