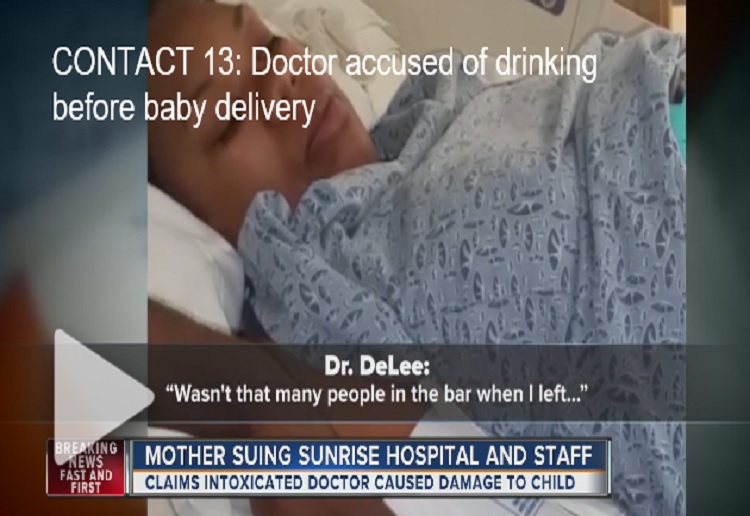 Mum sues her local hospital, claiming the doctor was drinking before delivering her baby who was injured during his birth.

Her baby suffered injuries that will last a lifetime following his delivery, reports KFDI.

Dr. Frank DeLee was heard saying “Wasn’t that many people in the bar when I left” on cell phone video.

Then a nurse asks “I’m sorry. Did you waste a drink?”

DeLee was openly talking about drinking while Alex Sims was in induced labor and facing a possible C-section at Sunrise Hospital in May 2015, according to Sims.

Alex’s doctor was on vacation. DeLee was the hospital’s on-call obstetrician and gynecologist at the time.

Alex’s family were recording video of the birth on a cell phone.

Nurse: “So… Is Belvedere that you just had to pour out? Is that what…?”

After discussing his booze of choice, you can see something odd in the video.

“It turned out to be the doctor who is barefooted, in his Bermuda shorts,” says attorney Cal Potter who represents Alex. He says the system betrayed the entire Sims family.

“I kept telling the doctor I can feel everything,” Alex explains. “I think the epidural wore off. And he’s like, ‘Oh just scoot your fat ass down’ and ‘Oh, I bet you wish your doctor would have came back in town.'”

It sounds too bad to be true. But on the video DeLee is heard saying, “I was told not to say lift your fat ass up and don’t you wish Richter stayed in town this weekend now?” referring to Alex’s doctor.

“It was just jaw dropping,” Alex says. “I just couldn’t fathom why all this was going on in the midst of me having a child.”

Alex’s mom, Sheree, says she knew something was wrong when the doctor walked in the door.

“I smelled alcohol. That’s what preceded the conversation about him coming from the bar. Because I said, ‘Oh, he smells like alcohol.'”

On the video, there’s more banter about booze.

Voice off camera: “You were already at happy hour?”

DeLee: “Well look what time it is.”

Nurse: “He’s been at happy hour since he left my C-section.”

They even talk about the type of tequila he had and which bar he was at.

So, could it all boil down to bad taste and poor judgment joking?

DeLee says his lawyer advised him not to talk on camera. When asked to provide an email address so he could send a statement, he hung up.

According to the lawsuit, DeLee’s rough delivery of Jared caused Erb’s Palsy — paralysis to the arm due to nerve damage.

“I think any person should be horrified,” says Potter who named the hospital and nurses in the lawsuit too, adding they had a duty to stop DeLee.

Medical experts hired to review the case determined DeLee used “inappropriate techniques by pulling” Jared’s arms. And the doctor “failed to diagnose and recognize the pressure of shoulder dystocia.”

According to court documents, DeLee denies any liability while Sunrise Hospital asked the court to toss out some of the claims.

“What we want to do is hold them accountable for the actions which we believe resulted in the injuries to her son’s shoulder,” says Potter.
“Someone needs to be accountable,” Alex says.  “And I just feel like, if I don’t speak up for my child, who will?”

Have you had a terrifying birth experience? Share your comments below.