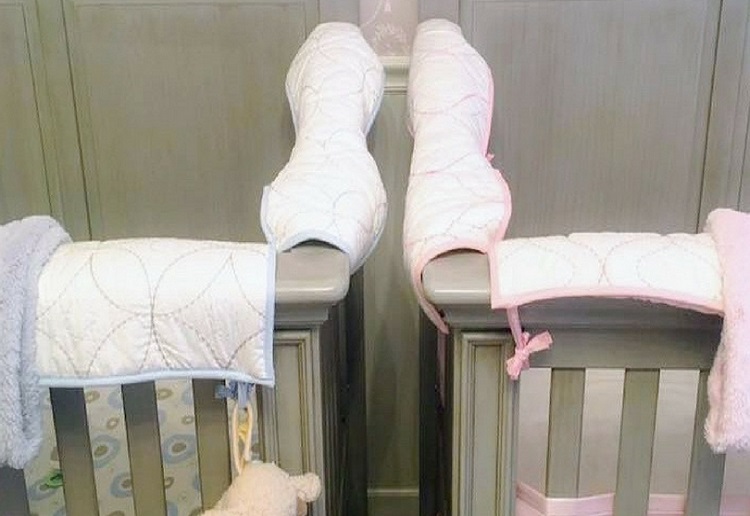 Alison Johnson shared her terrifying story with Love What Matters to warn other parents of this dangerous cot setup.

Alison writes, “I have a lot of friends that have twins or kids close in age that may have a similar set up, so I wanted to share something VERY scary that happened today.

“This morning I put Caleb down for his nap. Shortly after he started to cry. After a few minutes, I went in to check on him. He had climbed out of his crib and was stuck between his crib and Libby’s crib. His body fit through, but his head wouldn’t. He was using every ounce of energy he had to hold himself up by his little arms. If they had given out, he would’ve just been hanging there by his head.

“What’s even more scary is that like many moms, I generally use nap time as an opportunity to shower. Had I done that today and checked on him after five minutes, he would have literally hung himself. When baby proofing, I never in a million years would have seen this as a potential danger.

Please consider sharing this post in case someone you know may have a similar set up. It’s incredibly heartbreaking to think of what the outcome could have been today. I’m still totally shook up over it and don’t think the vision of him stuck there will ever leave my head.

“If you search on Google or Pinterest, almost all the inspiration photos are set up the way we had it with no warning. Even when researching about baby proofing, nothing is mentioned about this.

“I literally received 100’s of messages from other twin moms thanking me because they had their nursery set up the same exact way and have since changed it.

I feel 100% that by sharing our story we have saved a life, that’s all that really matters.”