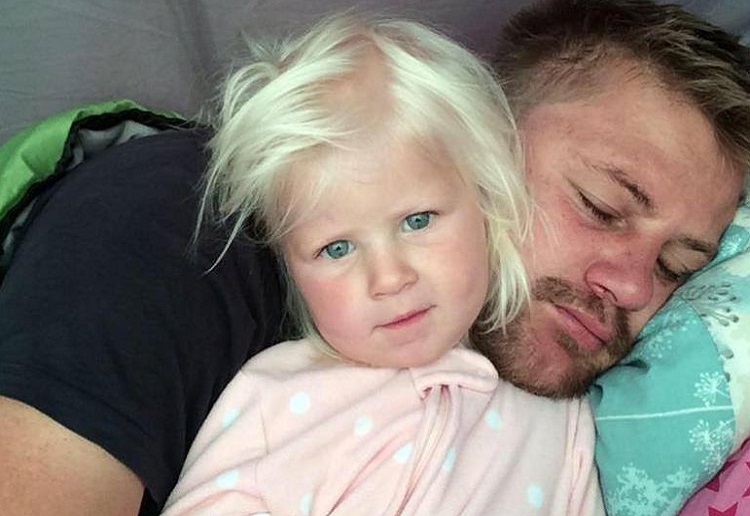 A grieving mum has relived the horror of seeing her husband fight to save their two-year-old daughter as they were swept to their deaths by an 8ft wave.

Lisinda Bruynius was fishing on rocks with her husband Rudy and two-year-old daughter McKayla, at a beach in Cornwall, when a ‘mass of water’ dragged them into the sea, shares Daily Mail.

The couple’s two sons, Damian, six, and Tyrone, ten, were also with them, but had been told to go higher on the rocks when the water started to come in. They then watched in horror as their parents and little sister were swept into the water.

An inquest into their deaths, Mrs Bruynius described how the little girl was still in her pram when the wave hit, but that her husband somehow managed to free her while they were in the water.

She then relived how she saw her husband clutching the little girl while he ‘screamed for help’ and struggled to say afloat. Tragically, he lost hold of the girl.

In a statement read out at the inquest, Mrs Bruynius – who escaped with just minor injuries – said the pain of her loss was ‘indescribable’.

She said: ‘I do not know how Rudy managed to free McKayla from her buggy but she was in Rudy’s arms.

‘We were both doing our best to keep afloat. I could hear Rudy screaming for help. In no time I had drifted 15 metres from rocks. There was no way anyone could get to the three of us.

‘I glanced across and could no longer see McKayla in Rudy’s arms. Rudy appeared to be floating in an upright position with his head back. I swam over to Rudy but he was unconscious.’

‘Rudy was a loving husband a wonderful father and leaves a void which can never be filled. He was our everything. We love and miss him so much.

‘McKayla, our gorgeous, beautiful baby girl, is forever in my heart and the pain that myself and the boys feel at losing them both is indescribable.’

‘The last eight months have been extremely difficult, and I hope and pray that others can learn from our tragedy.’

In Australia just last month a young man who was fishing off rocks without a life jacket has died after being swept into the ocean this morning.

The 23-year-old was fishing off Blue Fish Point at Manly at 6:30am, reports ABC news.

In a separate incident, just half an hour later, another angler was rescued after falling from rocks at Cape Solander near Kurnell and the southern Sydney beaches. That 20-year-old fisherman also was not wearing a life jacket.

Rock fishing is one of the most dangerous sports in Australia, with the majority of deaths off the NSW coastline.

After a coronial inquiry into a spate of rock fishing deaths, Deputy State Coroner Carmel Forbes recommended the state government make it compulsory for rock fishers to wear life jackets in 2015, reports ABC.

The ruling of compulsory life jackets is only restricted to Randwick Council area which contains Coogee and Maroubra beaches.

I think this is some thing that needs to be enforced right across the globe. Don’t you?