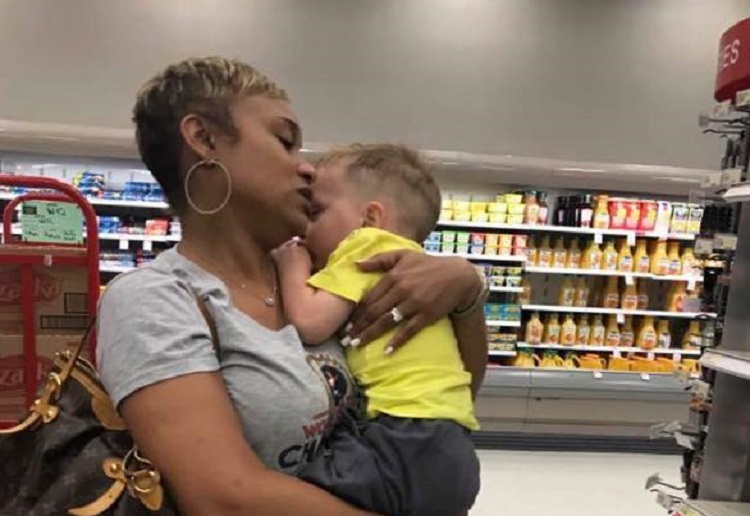 Mum’s story about the kind stranger who saved her during a nightmare shopping trip has gone viral.

Rebecca Paterson from Pearland, Texas, posted in a private mums’ group about the act of generosity that turned her day around – from a fellow local mum, Tiffany Guillory.

“My two-year-old and two-month-old were both having a meltdown at the same time in Target,” she wrote.

“I started putting things away on the shelf and was about to leave when she came over to help. She walked with me while I got the essentials needed for the day and kept hold of my toddler while he calmed down.

“She saved me today mums!!! I am so sleep-deprived and was running on empty. A little kindness and understanding goes a long way. I’ll definitely be paying it forward if I see a poor mum in need of help. Thanks Tiffany, you’re an angel.” 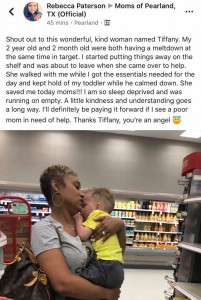 The mums post was shared publicly by another mum and soon went viral. It has had nearly 200,000 shares on Facebook.

Ms Guillory told KHOU 11 News that she spent 45 minutes walking around the shop holding two-year-old Jacob and speaking to him in a “soothing voice” while Paterson finished her shopping.

“I know how it is. I’ve been there. I have two kids, it’s frustrating, and that baby is two months. You have hormones going … and people are looking at you crazy, and I just wanted to help.”

ONLY ON @KHOU at 5:30PM: The woman whose small act of kindness at a #Pearland @Target is going viral, and the mom who calls her an angel. #khou11 #standingforHouston #Houston pic.twitter.com/TptyBMlRdI

Awesome to hear of women supporting each other, so touching x

Last month we shared the amazing story of a young mum who posted a Facebook plea for help with her triplets, three grandmothers answered the call. Read her story here.