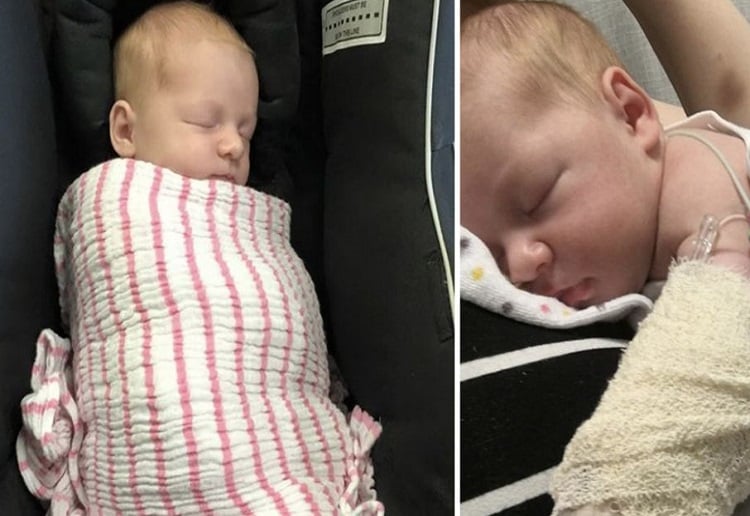 A Perth mum is sending a warning to all parents after her daughter fell deathly ill following a simple cuddle from a visitor who had a runny nose.

Megan Cockburn had given birth to her second daughter Lyla and was recovering at her mother’s home in Perth when visitors arrived to meet the family’s new addition.

Megan noticed that one of the guests was sniffling and immediately wondered if she should postpone the visit out of concerns for Lyla, who was just two-and-a-half weeks old at the time.

“There’s a lot of excitement around a newborn and people desperately want to meet their new family member and they don’t put into consideration what a slight sniffle can do,” Megan, 35, told Yahoo7 News.

“I didn’t have the courage to say no. It was that fear of offending them, and that you don’t want to be judged for being overprotective.”

Against her better judgement, Megan didn’t mention the visitor’s cold and handed little Lyla over for a cuddle.

“The cuddle was about one minute maybe two and that was enough.”

“She wouldn’t wake, she refused to feed and then she had a snuffly nose,” she said.

After the symptoms didn’t improve she rushed Lyla to hospital.

Doctors gave the infant a string of invasive procedures to determine what had caused her to fall sick, including blood tests, a lumbar puncture, cannulas pierced into her hands, arms and feet, and a nasal gastric tube to help her feed.

“It was horrible,” Megan recalled.

Lyla spent five days in hospital, but when her symptoms worsened she was re-admitted for another week.

“The second time she had so much mucus in her airways that she would cough and gag and not clear it herself. She would turn blue and stop breathing,” Megan said.

“You’ve never felt more helpless in your life than watching your little girl struggle like that. You feel guilty as a mum, you do the ‘what ifs’ and ‘I should’ves’… you feel that you could’ve prevented it.”

Learn to say NO!

Megan is sharing her story in the hopes of saving another baby’s life and to remind parents it’s okay to say no.

“I think as mums we need to embrace the word no and not feel guilty using it,” she said. “It’s not a burden if the person takes offence, it’s something they need to work on.

“Say no, close the door on them, because it’s not worth it. When they are that little and that vulnerable, there’s no such thing as being over-protective and over-loving.”