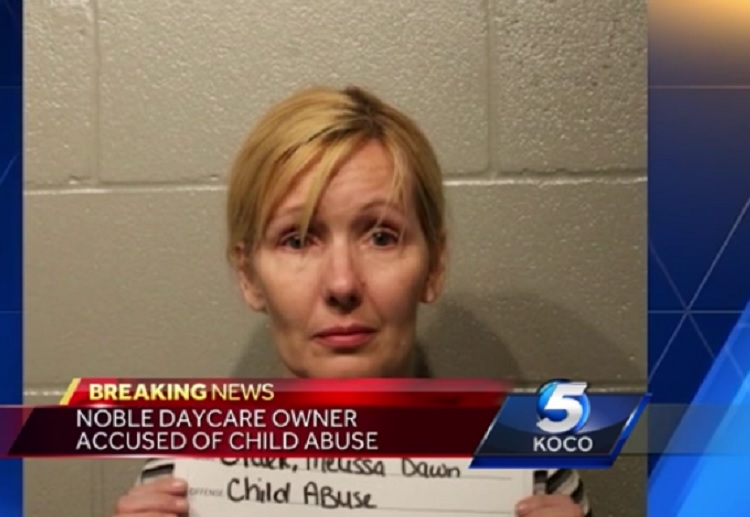 Woman faces murder charges after dropping a 4-month-old baby multiple times earlier in the week, before it died on Sunday night.

Police received a call shortly after 1:30 p.m. Tuesday about an unresponsive child at Melissa Clark’s home according to an affidavit, reports KOCO.

A murder charge has been filed against Clark in connection with the incident.

The accused told officers that she laid the baby down for a nap and later heard the 4-month-old girl making a gurgling sound and found her limp and unresponsive, the affidavit said. She began to perform CPR on the baby and called 911.

The baby was taken to hospital and put on life support. She died Sunday night.

Doctor’s found that the baby had a head injury related to abusive head trauma and brain bleeding, the affidavit said. The doctor concluded that the injuries were consistent with child abuse.

The accused told an Oklahoma State Bureau of Investigation agent Wednesday that she was holding the baby in her left arm when the 4-month-old fell, according to the affidavit. She said she did not drop the baby and that the baby landed on her left elbow and both knees.

She told the agent that the baby was not injured in the fall and that she cried because she was scared, the affidavit said.

The affidavit said Clark told the agent that she was making coffee around 11:30 a.m. Tuesday when she was holding the baby again when she somehow dropped and hit the tile floor. She believed the baby landed on her head on a thin black rug.

She tried consoling the baby, who cried for about five minutes, the affidavit said. The baby had a small red mark on the back of her head, and Clark didn’t think there was anything wrong with her.

Clark noticed around 1:30 p.m. Tuesday that the baby was close to falling asleep, so she placed the 4-month-old girl on a blanket on the floor so she could sleep.

Twenty minutes later, the accused heard a gurgling sound as if the baby was choking on fluids, the affidavit said. The baby was limp, unresponsive and wasn’t breathing.

She claimed she tried to get the baby to respond and said she threw her into a bouncy seat, according to the affidavit. The baby’s body hit a metal bar on the bouncy seat and she fell to the floor again.

Clark said she was stressed when she threw the baby, citing that she felt like a loser because of marriage, financial and family problems, the affidavit said.

She was released from Cleveland County Jail after posting a $75,000 bond.

We hope this woman feels the full brunt of the law.