Article “My life changed overnight with one long, hard push” 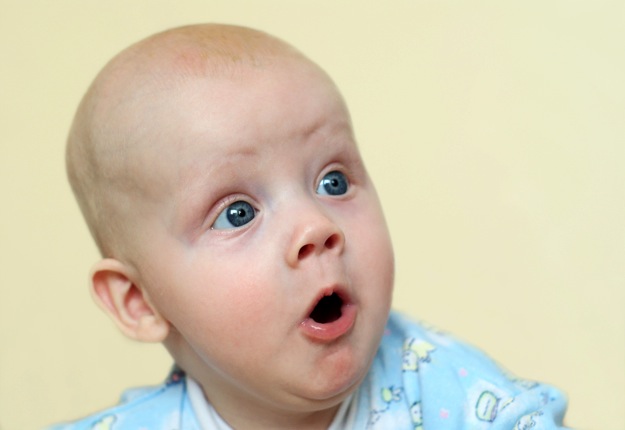 On the first day of a new job as a sales executive, little did Klara Dollan know that, eight hours later, she would give birth to a healthy 7lb baby girl.

She had no morning sickness, back pain or visible baby bump, there was nothing at all to hint that Klara, 22, was pregnant. Although she hadn’t had a monthly bleed, that wasn’t surprising, as she was on the Pill continuously, reports the Daily Mail.

So when she started to have cramps early that morning she presumed she was simply having a painful period.
‘I spent the next hour and a half walking back and forth from the bathroom to my room. The only place I felt comfortable was sitting on the toilet. The pain suddenly became so bad I said to myself: “I don’t care, I’m going to have to scream.” I heard a knock at the door and managed to drag myself off the toilet and open it – by this point I was bleeding heavily.

‘My neighbour came in and I asked her to call an ambulance. Then I had this extremely painful urge to push: that’s when the head came out. My neighbour was in the corridor and I was screaming: “It’s a baby, oh my God! It’s a baby.” ‘

‘Out of instinct, I grabbed a towel and wrapped her up in it. I couldn’t believe I had a baby in my hands. I was in complete and utter shock,’ she says. The ambulance arrived and a quick visit to hospital confirmed Klara and her baby were in excellent health.

That left the difficult task of breaking the news to her mother, who was at work. ‘I broke down in tears on the phone. I told her I had given birth to a baby and there was silence.

‘Then she said: “How is that possible? I saw you this morning and you weren’t pregnant.” ‘

Klara, who is 6 ft tall and weighs 10½ st, gained just under 28lb over the course of the pregnancy – going up only one jeans size.

Five months before the birth, she’d separated from her boyfriend of two and a half years, Kris, and put the weight gain down to comfort eating.

‘I’d put on a bit of weight in most places, but I have a photo of myself in a bodycon dress at seven months pregnant and you wouldn’t know it,’ she says. ‘The only thing I would say is I noticed the top half of my stomach was very hard when I touched it, about a month before the birth.

‘Most women at nine months are huge – my mum gained nearly six stone with me.

The Daily Mail says, one in 450 pregnant women in the UK don’t know they are going to have a baby until week 20 of their pregnancy (half-way through), and one in 2,500 women are oblivious to the fact until they go into labour.

It’s a phenomenon known as cryptic pregnancy. ‘It’ll be happening every week somewhere in the UK,’ says Dr Helen Stokes-Lampard, a clinical senior lecturer and spokesperson for the Royal College of General Practitioners. In her 20 years as a GP, Dr Stokes-Lampard has seen half a dozen cases of this sort. ‘These are often women who are very busy, leading crazy lives and so they often miss the signs that they are expecting.’

Women with erratic menstrual cycles are also more likely to miss signs they are expecting. This is especially true among women with polycystic ovary syndrome (PCOS), where small cysts grow on the ovaries; the hormone imbalance often leads to irregular or non-existent periods.

Klara believes she became pregnant while on holiday in Latvia with Kris when she was on antibiotics and vomited several times.

Klara is adjusting well to life with two-month-old Amelia, with the support of her family and Kris, who thought Klara was joking when she first told him the story.

Klara says initially she was worried people might think she knew she was pregnant and was hiding it. As she says: ‘My mum had a lot of miscarriages before me, so I always thought I would have the same problems.

‘I was looking forward to having a normal nine-to-five job, then my life changed overnight, in the blink of an eye, with one long, hard push.’

Characteristics/symptoms of a cryptic pregnancy are:

Negative urine, blood pregnancy tests and ultrasounds
Bleeding/continued periods: Majority of the women who go through a cryptic pregnancy continue to have some sort of “period-like” bleeding (spotting, light bleeding) through the entire pregnancy.
Early labour signs that occur off and on for weeks or even months
Weight loss/gain
Typical standard pregnancy symptoms-nausea, vomiting, food aversion, frequent urination, heart burn which are often dismissed and mistaken for some other condition
Slow growth of the abdomen/pregnant belly, so a neat bump might not be visible
An extended gestational period, typically of 17 months or longer

Causes of a cryptic pregnancy?

Studies suggest that such cryptic pregnancies occur when women suffer from a hormonal imbalance.

Following could be the possible reasons :
Polycystic Ovarian Syndrome (PCOS), a common endocrine system disorder among women of reproductive age.
Perimenopause, which can begin as early as age 30, and go undetected.
Recent pregnancy, where hormones may not have time to go back to normal before falling pregnant again
If the woman is still breastfeeding
The woman has a very low body fat percentage
The woman has recently used, or is currently using, a birth control method that continually releases hormones into the body.
If the woman is in extreme stress