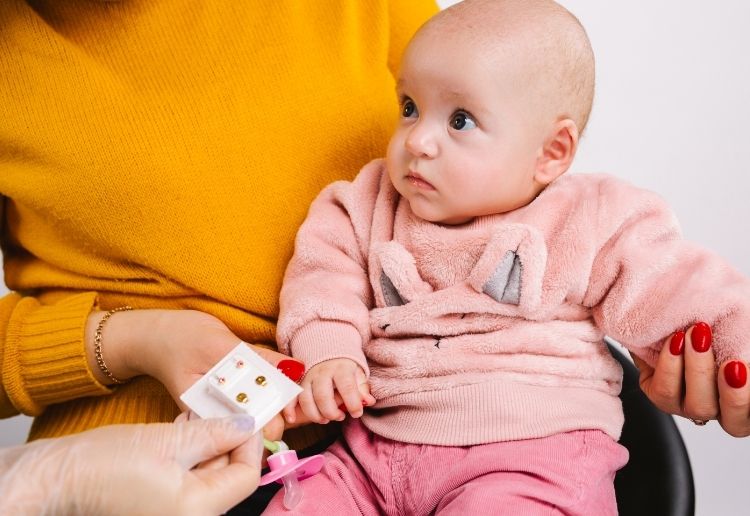 A sneaky mother-in-law is conspiring to get her granddaughter’s ear’s pierced, despite the baby’s mum being against the idea.

So now the concerned mum has put her foot down, no longer allowing her mother-in-law unsupervised access to the 10-month-old.

“Since she was born my MIL has been on at me asking me when I’m going to have her ears pierced. My daughter will not be having her ears pierced until she asks for it (so definitely not yet when she can’t even speak). She says it’s hypocritical of me considering all the piercings I have (several piercings on both ears, plus my nose), but my own mother wouldn’t let me even get my earlobes pierced until I was 10.”

The 31-year-old mum says her mother-in-law allowed her own daughters to have their ears pierced when ‘they were tiny’, claiming it’s better to do it when they won’t remember it. The mum’s husband supports whatever decision she makes, particularly because she’s the one who’ll have to clean and care for the piercings.

But since laying down the law, the mum says her sneaky mother-in-law has been looking for ways to get the baby’s ears pierced, without her permission.

“So a few weeks ago, MIL was looking after the baby for us because I was going with my husband to his uncle’s funeral. As I was coming down the stairs I hear MIL talking to my daughter about how ‘they’re going to go out shopping and get her some pretty earrings’. I went into the room and told her in no uncertain terms that that would not be happening, and if I can’t trust her to respect my decisions about my own daughter I would find someone else to look after her (I managed to get my sister to watch her).

“MIL keeps trying to arrange to have her for a few hours, she even tried to offer to have her overnight so my husband and I can go out. I refused, I told MIL she could come and visit her, but I no longer trusted her not to get her ears pierced behind my back, so she would be seeing her supervised.”

But now the baby ban has caused a rift, with the mum’s husband and sisters-in-law saying she’s overreacting. And it’s left the mum wondering if she’s done the right thing.

What do you think the mum should do? Let us know in the comments below.