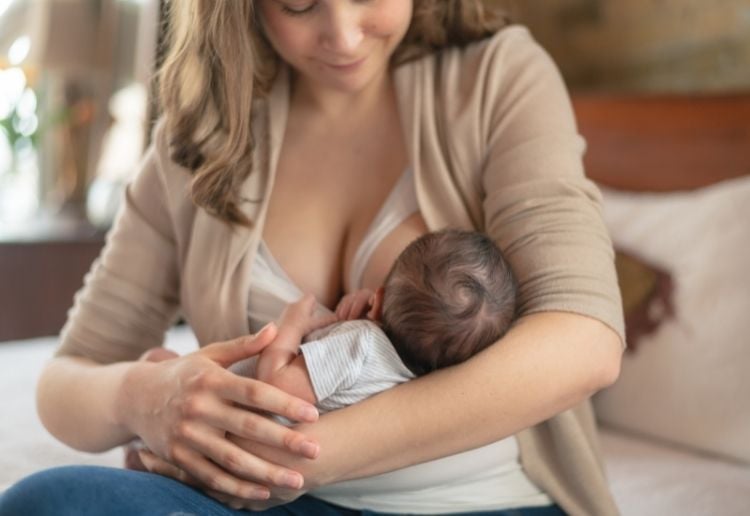 A new dad says he’s banned his mother from seeing his newborn, after she flew into a rage over breastfeeding.

The furious dad says he’s sweet wife, who hates confrontation, was left hysterical after she was berated by her mother-in-law for breastfeeding in front of her father-in-law.

“My wife hates confrontation, she never stands up for herself, she won’t argue with anyone ever I mean ever,” the new dad explained on reddit. “She will let you walk all over her and then apologise to you.”

He said one thing she has been most afraid of doing is breastfeeding, because of her concern it could lead to confrontation. In fact, she’s so worried that she only breastfeeds at home or in a bathroom, and always with a blanket. However, the devoted husband says he’s spent a lot of time supporting his wife so that she feels comfortable breastfeeding outside of a bathroom when they’re not at home.

“Well, we were at my mother’s house,” the new dad explained. “I don’t have the best relationship with her but my wife thinks it’s important and I enjoy talking to my dad. So we were over with the baby chatting with my father and my mother cooking and as they were talking she started feeding.

“Baby was eating and she had a blanket covering her slightly. My dad has six kids so he couldn’t give less of a sh*t, he looked away for a moment so she could get situated and engaged back in conversation without any issue.

“My mother comes in, gasps and goes on a rant. She said that that is disgusting and if she was to do that she should’ve gone home, especially in front of her husband, who apparently ‘looks uncomfortable’ and it’s rude to do when you know people around you don’t like it. Dad cut her off saying to keep him out of it and feeding a baby wasn’t his issue. She ignored him and continued ranting saying that she needed to respect herself more and don’t ever do that in her house again.

“I stopped her, I said that she needed to get lost and get over herself she had six kids who she undoubtedly did the same thing with and this was just her way of taking her anger out but she’s not going to do it on her. I said that she was being a hypocritical a**hole and that this is the last time she’s seeing wife or baby. This happened once and not going to happen again.

“Then she said she was just in a bad mood and she’s so sorry she took it out on her and she’s welcomed to do that whenever she needs to. I told her she should have thought about that before. Then I went to my wife, who mid-rant went to the bathroom in hysterics but didn’t want to interrupt the baby’s eating. We sat in the bathroom for a little while until baby was done, she stopped crying.

“We left, my dad said I was being more reasonable than he would have. Mum sent me tons of messages. Family is telling me I was being dramatic and that it wasn’t that serious and I was being entirely unreasonable and if my wife was that hurt by it she needed to grow ‘thicker skin’.

“She didn’t even actually have an issue, she was just being mean. I think I was right to do what I did.”

The dad now wants to know if he did should reverse his decision to ban his mum from seeing her grandchild. Let us know what you think in the comments below.