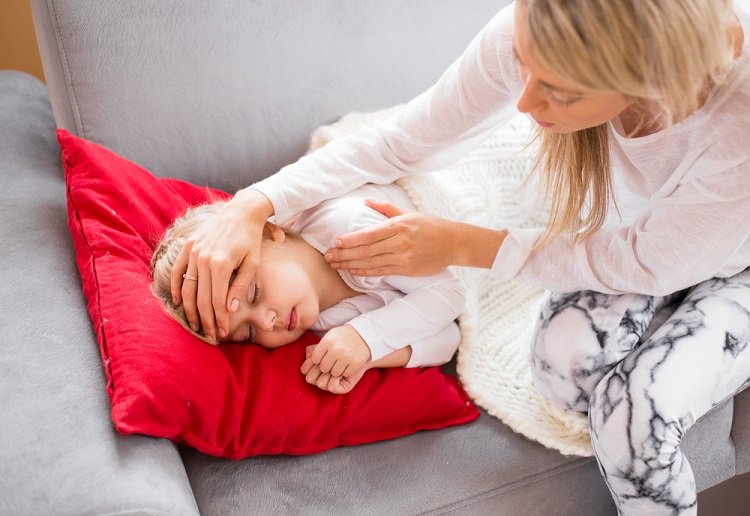 Becoming a parent for the first time was undoubtedly a scary moment for me.

I truly had no idea what I was doing and my gorgeous little baby refused to sleep or breastfeed and was constantly struggling with wind pain.

I was living in a haze of sleep deprivation and milk pumping.

I struggled to get everything done each day and marvelled at the photos of people and their immaculately dressed newborns who seemingly had time for a daily photo shoot.

Fear of doing the wrong thing

Of course all of this was outweighed by the overwhelming love that I had for this new little being. That in itself bought fear as I was terrified of doing the wrong thing for this beautiful little soul who was so dependent on me.

I live in an area with low vaccination rates so I was very concerned about whooping cough and when my little one developed a cough at 5 weeks old I rushed him straight to the Doctor to be checked over.

I have a tendency to err on the side of the dramatics so I am conscious of trying not to overreact or panic when things happen.

We seemed to get along pretty well with no major setbacks until he reached 9 months old and winter started.

He got sick one night and was vomiting. He has always vomited a lot as a baby so we were used to that but he clearly had a bug. We monitored him through the night and discussed taking him up to the hospital but decided on taking him to the Doctors the next morning. By 7am he was starting to look really pale and generally unwell so I bundled him up in the car and headed for the hospital.

We were triaged with no major issues and were waiting to see the Doctor. As the Doctor was examining him he seemed to get worse and his oxygen levels started dropping. I could see the concern on the Doctors face as we were taken in for x-rays and he was placed on monitors and oxygen. With no improvement, we were taken by ambulance to a larger hospital where the poor little mite was poked and prodded and given a nasal gastric tube.

He looked so unwell and lacked the energy to fight. He was still unable to hold down any fluids and my fear for him was growing.

He eventually turned a corner after oxygen, medication, steroids and Ventolin, and after two nights in hospital with exceptional care from all of the staff we were able to return home.

We had a post hospital review with the General practitioner who assured us he was fine now and to keep monitoring him with a Ventolin wean off.

My husband works away so a couple of weeks later he headed off to work for a month and I kept looking after our lively little boy.

He was going well and was his usual lively cheeky self but on the Friday morning he sounded like he had a bit of a wheeze. There were no other symptoms and I wasn’t overly concerned about him but since I was home alone for the weekend I thought I better get him checked by the Doctor to reassure myself. I was worried of course that I was overreacting but I couldn’t stand the thought of something happening over the weekend with everything closed.

By the time we got into the Doctors that morning my little boy was clearly struggling to breathe and the noise was awful. The Doctors called an ambulance and we were rushed straight to hospital and admitted.

They struggled to stabilise him and I helplessly watched on as they put in cannulas and nasal gastric tubes and hooked him up to oxygen.

He was unsettled and unwell and they continued to struggle to stabilise his oxygen levels. The paediatrician was called in the middle of the night and the nurse barely left our side as we tried to help my gorgeous boy breathe easy.

It was a massive relief when he was finally stable by the morning and was able to start the process of recovery. The nurse who took over in the morning kindly told me I looked terrible and I had no doubt she was right.

Luckily he made a full recovery and was sent home to recover and given an asthma prevention plan.

He has been sick since but nothing like those first few times again and we are hoping against hope he can grow out of his breathing problems but I have learned to trust my instincts when it comes to my baby and if I’m overreacting who cares they may laugh or brush me off but at least I know I won’t be ignoring something potentially serious.

What has been your scariest experience as a mum? Share it with us in the comments below.