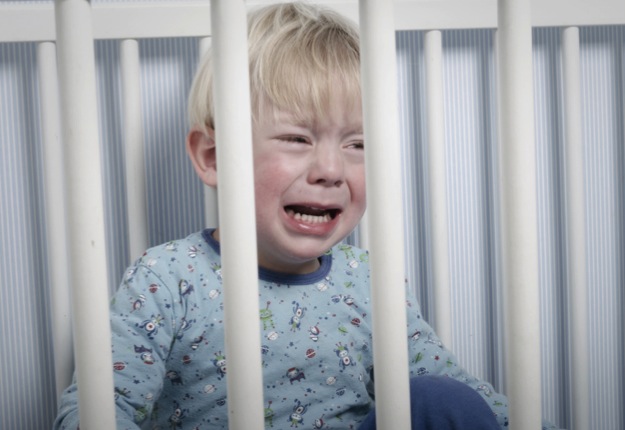 By Best Dads in the World Ever!

I am having a beautiful dream. The sun is shining and there’s unlimited pale ale. My footy team has just won the grand final and I am riding with the premiership cup and the pale ale into the clear blue sky. Iggle Piggle and Upsy Daisy are there too. They chirp melodiously as we ascend to the heavens.

Why doesn’t the blue one have any clothes?

A demonic scream rudely shatters my serenity. My Dad senses tell me: ‘son in trouble!’

Arriving at his room, he’s distressed. The covers are kicked off, he’s frantically wriggling around and making a sharp, intense cry.

Being the world’s greatest detective: I conclude it’s a bad nightmare. I try to gently wake him. He responds and starts talking to me. The words are real, but they are jumbled and non-nonsensical (like a Michael Bay movie). The whole thing is weird and noisy (like a Michael Bay movie), but it’s over in five minutes. I put it down to too much In The Night Garden. That stuff is hardcore and will mess up anyone.

A few nights later it happens again. Except this time my nightmare CPR is useless. My son yelps, opens his eyes, talks, sweats, kicks and lashes out at me. I think his head even rotates 360 degrees and he says something about my mother’s attempts to make friends in hell.

My mother does what in where?

I take myself to my happy place. Makka Pakka gives me a rock and I share Iggle Piggle’s blankie, but it won’t work. My son’s in complete meltdown mode and I am useless, clueless and very tired. This episode lasts over a decade.

Like all the world’s problems, they are best solved on the Internet. I do some research and learn that my son is having night terrors: a sleep disruption that occurs during the early period of deep sleep. The disruption causes terror and the symptoms are much more dramatic than nightmares.

In less scientific terms, it’s the Godzilla of all nightmares.

Here’s what you need to know about night terrors:

Generally between 3-12 years for kids, 20-30 for adults (also the prime years for In the Night Garden viewing. Coincidence? I think not).

Difference between terrors and nightmares

Have your kids experienced any night terrors? How have you handled? Please SHARE in the comments below.