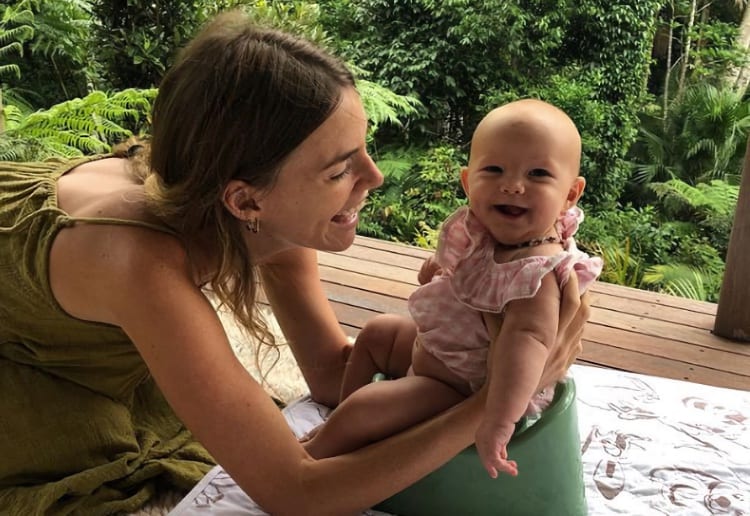 My daughter was already four when we finally got rid of nappies. But one model-mum influencer is boasting that her nine month old is just about toilet trained and her critics are not impressed.

Montana Lower certainly has a list of accolades behind her name – she’s an civil/environmental engineer, a model and an artist. But Montana is probably most Insta-famous for being the mum to baby daughter Blue, along with her partner Tom.

Montana’s Instagram feed (followed by over 177,000 fans) is flooded with adorable photos of the gorgeous mum and her cutie pie daughter. There are lots of pics showing a grinning Blue being cuddled by mum. There are also a number of photos of Montana breastfeeding her bub as well as care-free shots of a happy, nappy-free Blue.

The young influencer is passionate about a movement called the “elimination communication method”, or EC, which aims to reduce the reliance on nappies.

“She hasn’t done a poo in her nappy since she was two weeks old. We go through about two nappies a day — one at night and just one in the day,” Montana told the ABC.

The EC concept is basically centred around parents responding to subtle cues from their baby that they need to do a wee or poo. When the baby looks like they need to ‘go’, the parent responds swiftly by holding them over a potty or toilet.

What kind of signs are we talking about? Well, each baby is different but some babies may go quiet or stop moving or shake his leg or arm. The parent will get to know their baby’s cue and in turn, the signs will get stronger once the parent starts responding.

Watch For The Signs

Montana said that Blue started off by making different faces, grunting or yelling when she needed the toilet and it went from there.

“At four months old she was tapping her nappy and grabbing her potty to bring it close when she wanted to go,” she said.

The influencer has seen her online community grow since she started posting about her experiences with EC.

“I’m trained as an environmental engineer; I did a lot of reading about what is better between disposable and reusable nappies and there are arguments against both, so we decided why don’t we do neither,” Montana said.

“The biggest reason why we started taking Blue to the toilet at 2 weeks old is learning that being left to sit in a soiled diaper can add to shame and disassociation with our intimate areas – especially for girls. And it makes sense!”

“Babies are so much more conscious than we have been led to believe and it is one of my biggest priorities as a mama that Blue feels confident AND empowered in her body,” Montana writes on her blog.

A Big Supporter Of EC

In her latest post, Montana shares a photo of Baby Blue lying on mum’s chest with the goofiest smile on the bub’s face and her nether regions covered by a photoshopped flower. In the post, Montana explains about a new video that she has uploaded about the EC method.

Many of her followers applauded her unconventional method of toilet-training.

“I thought cloth bamboo nappies and eco disposables was helping my boys and myself do our little part for the environment but this is remarkable. Wish I had this potty knowledge all those moons ago too,” said one.

“That truly is amazing. I had no idea babies could do that! It was clear to me from Day 1 that my daughter knew a LOT more than I had thought possible. It’s like they are born knowing everything and UNlearn it thru social conditioning” said another.

However, even her supporters were a bit concerned about the images she posts of her daughter:

“My heart hurts for your child to have these images on the internet, your grown babe might not be so chuffed that their personal toileting moments are so public ya know. Absolutely ways to share this great info without the imagery,” said one.

“I’m not a hater at all, actually I love your lifestyle and philosophy, but I’m concerned with Blue being over exposed right now,” said another.

“What happens when your baby is grown and there’s all this content of her potty training? I know it’s important to educate other parents, but what about your child’s personal privacy?” asked another concerned follower.

Montana has responded to her critics saying:
“Tom and I thought long and hard about sharing Blue’s presence online at all. But we have tapped deep into our intuition and values and believe we all have an understanding of the power of showing this IS possible and our boundaries within that. I remember when I was learning to breastfeed, the only images/videos that helped me were real videos of real babies and nipples. If you have any suggestions of how to share this in a way that is equally as powerful we are all ears!”

The free-spirited couple and their daughter have now gone “off-grid” and have moved into a bus and are travelling around Australia.

Research by the University of New South Wales discovered that there was little benefit in starting toilet training before 18 months of age to achieving independent toileting, as reported by the ABC.

However, the study did recognise the “obvious hygiene and empowerment benefits” claimed by EC supporters.

Do you support the no-nappy method that this mum influencer is following? Do you think this mum is ‘exploiting’ her baby? Tell us in the comments below.