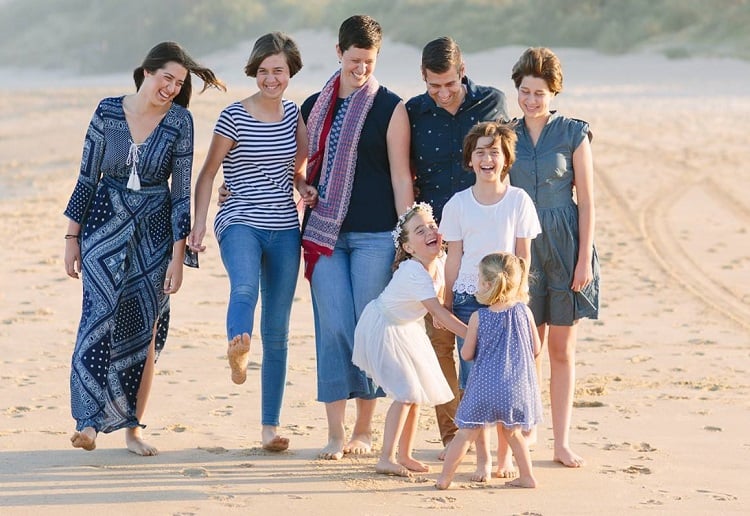 Dr Justin Coulson is a parenting, relationships and happiness expert. Imagine his reaction when he discovered his young daughter was being harassed for nude shots.

Justin is a proud dad of six girls. He often speaks at schools and seminars about keeping our children safe from harm. Ironically he is away in Melbourne at the moment running seminars on how to keep our boys and girls safe from the harms of pornography

He shared on Facebook last night how horrified he was when his daughter rang him in tears to tell him what had happened to her.

“In the last 20 or 30 minutes one of my daughters – my precious, pure, innocent daughters – has been harassed and badgered for nude images by one of her peers – a young man she thought was her friend. All done blatantly and without regard for her feelings by a boy via text message.

This boy that she knows so well, and who has been a great buddy for years, asked her ever so innocently what she was wearing. She replied that she was in her pyjamas.

Then he asked for a photo of her. She thought it odd but sent it. She was not in her bedroom (no phones allowed there) so didn’t think anything of it.

Then he asked what she was wearing under her clothes. She chose not to respond. Then he asked for an image. Then when she refused and told him to stop he became more aggressive. Unfortunately, the boy would not accept my daughters’ refusals and continued to badger her until she broke down in tears.

I’m away in Melbourne running seminars on how to keep our boys and girls safe from the harms of pornography, and how to raise children who make good decisions with technology. How ironic!

My daughter called me, sobbing.
“Dad, I need to tell you what has just happened. I don’t know what to do.”

I was able to Google the boys’ parents and call them. I explained who I was. I then apologised that I was sharing unwanted news and explained what had happened. And they were brilliant.

But I’m frustrated and mad as hell! My daughters should not have to put up with this. EVER! Nor should yours.
It is sexual harassment.

It is entirely inappropriate. And it teaches them that they are not worth anything except for the sexual qualities that they can offer.

My daughter is in tears because tonight she has lost a friend. But she is also in tears because she wonders whether she is of value as a human or just as a sex object. These demeaning and inappropriate requests are unfair. They tear at the fabric of what it means to be a human rather than an object. They hurt our daughters. They diminish our sons. And they rupture relationships and resilience and self worth in everyone who is affected.

I’m grateful that this boy’s parents were so open to taking my call and dealing constructively with the situation. I wish more parents were like that.

I’m grateful to have had a long and positive conversation with my daughter. She is going to be fine.

But you know what?

Why the hell should I have to let my daughter know at this tender age that this kind of behaviour is going to be an ongoing feature of her life?

How many more times during her adolescence and young adulthood is this daughter going to be sexually harassed, pressured to sexualise herself, and treated as a sexual object?

As a father of six daughters, how many times am I going to have to consult a weeping daughter as she cries about the way boys treat her?

How many more inappropriate text messages are my girls going to receive? How many more times will they need to make a decision around what is appropriate and what is not when it comes to boys and their desires.

This problem is building. It is not going away. And it is so deeply destructive to our children.

Parents… Please make sure your girls know they can come to you if they are harassed. Knowing my daughter felt safe enough to come to me is something I’m grateful for, even though she should never have had to come to me in the first place.

So please make sure your daughters know that you are a safe place.

And please, teach your sons to respect girls for who they are as people. Teach them to treat girls as friends and as humans, not as objects.

Oh, and make sure that your daughters keep any evidence. I made sure that I explained to the mum I spoke with that we had the messages and if there were any further issues we had everything to take to the police to ensure this doesn’t happen again, to our daughter or to anyone else’s.

It takes a village.”

How would you react if this was your child?

We have shared this post with full permission from Dr Justin Coulson.