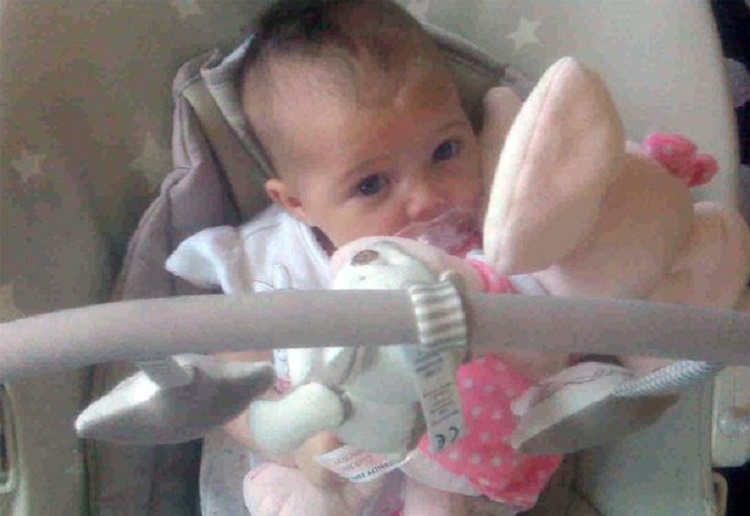 Parents jailed after baby found dead with horrific burns after they left her in front of a gas fire to ‘warm up’.

Kayleigh Sheard was just 18 weeks old when she was found by paramedics, strapped into her bouncy chair, in front of the fire. She also had fractured bones, bruises and bite marks, reports The Mirror.

Her parents Daniel Sheard, 24, and Lucy Damen, 22, were jailed for six years and four-and-a-half years respectively after being convicted of cruelty by neglect at Leeds Crown Court.

She was found by paramedics in September 2013, strapped into her bouncy chair in front of the fire which was burning at maximum heat.

Sheard told paramedics he had turned the fire up in a bid to wake her up.

Jailing the pair, Judge Tom Bayliss QC said their behaviour amounted to “protracted if not long term neglect over one third of this child’s short life”.

He said: “Each of you knew the injuries would suggest to any health care worker that the injuries were non-accidental so you sought to conceal them.”

“There is no excuse for what you did. You both have proved unfit to ever look after children.”

In a statement Kayleigh’s family said: “As a family we will never understand how or why Kayleigh was so badly mistreated by the two people who should have loved and cherished her most.

“Our grief has been prolonged for over three years while we patiently waited for the conclusion of the case.

“We will never be able to come to terms with the loss of Kayleigh, albeit her life was very short she gave us all joy. Our hope is now that justice has been done, Kayleigh Mai can rest in peace and we can all try and move on as a family.”

Det Supt Simon Atkinson, of the Homicide and Major Enquiry Team, said: “This has been a deeply tragic case where a four-month-old baby girl has lost her life before its even had chance to really begin.

“Kayleigh was subjected to horrendous treatment by the two people who were solely responsible for her care and wellbeing. Instead, they subjected her to abhorrent abuse and neglect which resulted in her appalling injuries.

“She must have been in absolute agony in the days until she died due to the injuries inflicted at the hands of Lucy Damen and Daniel Sheard.

“Both Damen and Sheard will now be given an appropriate custodial sentences for the offences they have committed and I believe justice has been served for Kayleigh in bringing this case before the courts.”