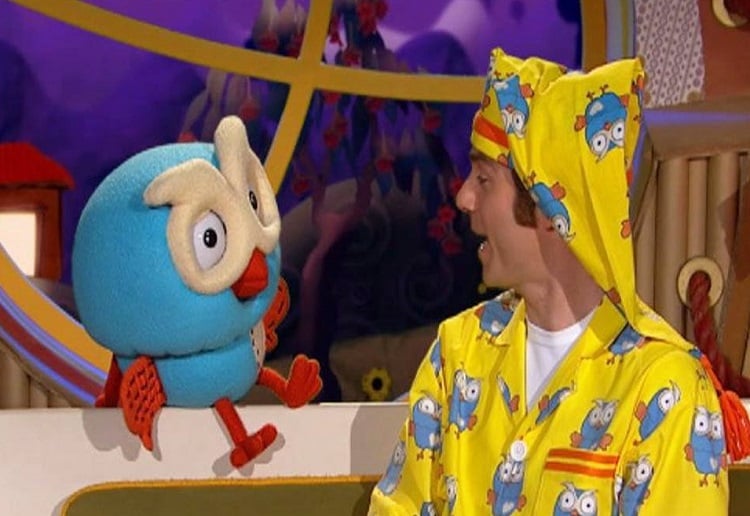 Parents once again outraged with ABC Kids for messing with their children’s routine.

A few months ago parents were up in arms because ABC KIDS dare to mess with their morning routine.

“Don’t they realise this will mean hundreds of kids will miss their favourite show because they will be dropping older siblings at school around the time play School will be screening.”

What could be worse than that?

This means another half an hour of ABC Kids every day, but most parents are furious about the new change.  Why?

Because for many Aussie families, Giggle and Hoot’s goodnight song on ABC Kids is part of the nightly bedtime routine, with main character Giggle always going to bed at 7pm.

Related: Mums are outraged that ABC KIDS are messing with their morning routine

On a post on the ABC Kids Parents Facebook page most commenters are furious at the channel.

‘No good when kids used the routine and saying goodnight for a 7pm bedtime,’ commented one angry mother.

Another wrote, ‘Not good for our house. Our little boy knows it’s bedtime when Giggle goes to bed at 7!’

‘This will wreak havoc at bedtime,’ one mother added.

ABC Kids have replied advising parents not to panic, there will be an alternative!

“Starting 4 December, Hoot’s Lullaby will air at 7.25pm (or you can watch it any time on ABC KIDS iview). And in place of the 7pm lullaby in December we will play all new episodes of Play School Story Time, offering a bedtime story book by some of your favourite Australians. We hope this can work for those who wish to maintain this time as the end of their TV day,” replied an ABC spokes person. 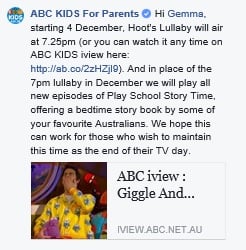 As Family Therapist, Nicole Kingston said on her Facebook page, “Making decisions that cause upset to our little ones is hard, including turning off the TV when they are wanting to watch it. But you are the parent so you can determine when your little one is tired and what time they need to go to bed.”

She continued, “Much to our toddlers disgust, you can turn the TV off before saying goodnight to Jimmy Giggle and Hoot…you do not need to wait until ABC Kids decide to end their program.”

I must say I agree with Nicole. While it is nice to have a routine it is better that parents decide when is the right time for bed, not a TV show.

How does your bedtime routine work?