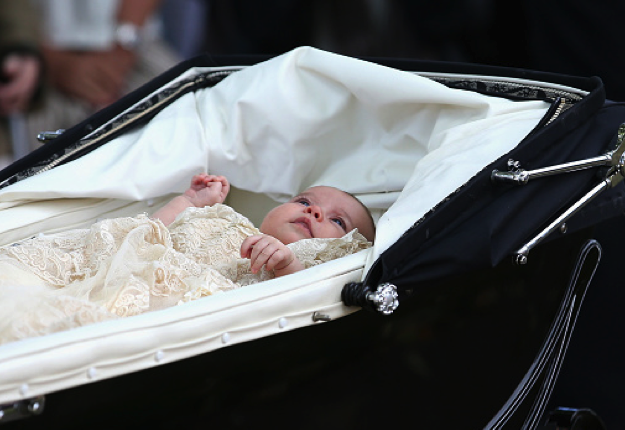 Princess Charlotte of Cambridge was christened in the UK over the weekend, and we couldn’t help but share some of the gorgeous photos from the occasion.

The newest addition to the Royal Family was christened in the church of St. Mary Magdalene on the Queen’s Sandringham estate, the same place where her late grandmother Diana, Princess of Wales, was christened in 1961.

Princess Charlotte arrived in her pram with her parents the Duke and Duchess of Cambridge, along with her doting older brother Prince George.

Only 21 official guests were invited to the occasion. In attendance was the Queen and Prince Philip, Prince Charles, and his wife Camilla, Duchess of Cornwall, along with Kate’s parents Michael and Carole Middleton, as well as her brother and sister James and Pippa Middleton.

The Queen even shared a special moment with her great-grandson Prince George outside the chapel before the ceremony.

A wriggly Princess Charlotte was carried by her mother into St. Mary Magdalene, in the same gown that was donned by her older brother George at his christening 2 years ago. It is a replica of the gown worn by her father Prince William and uncle Prince Harry, that was originally created in 1841.

The official photographs were taken by famous photographer (and a favourite of Princess Diana) Mario Testino, and were released by Kensington Palace overnight.

The first photo, which was taken inside Sandringham House, features the Queen along with three generations of royal successors.

Along with the main photograph with all Princess Charlotte’s immediate relatives, the Duke and Duchess of Cambridge also released three more informal photos of themselves and their children.